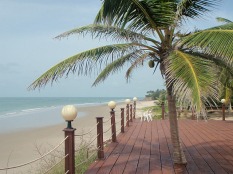 View from a tree 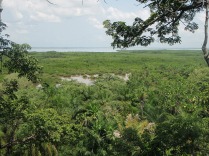 All drums and no fuel.

Apologies for all the tropical beach photos! West Africa has refused to let us camp anywhere other than on tropical beaches on the Atlantic Ocean or by the side of numerous rivers. So far we have had it rather cushy but tomorrow (Monday) we head into Guinea-Bissau which may prove less peachy!

The other day (I can’t remember which one but, between this blog and my last) we decided to hire a boat up to a place called Point St. George. We were supposed to go there in the truck but the roads are still too wet in the more remote areas. The boat ride took a good two hours and we weren’t really sure what we were going to see. The crew incidentally did a super job of keeping us entertained playing the drums for the whole duration. When we arrived at the local village we were told of a tree that we could climb which was approximately 2km away although, it would cost $6 for the privilege which seemed a bit steep. 3-4km (!) later after walking through the African bush in 10 billion percent humidity we came across the tree. It was impressive. The viewing platform was 25m (75ft) above the ground and was accessible by a sturdy rope ladder. Thankfully a safety harness was provided for us which latched onto a safety wire to prevent people falling to their death. The climb up got the adrenaline going for the first time in years and the view from the top was fantastic. $6 was soon realized to be a bargain.

3-4km and we were back at the village. The next activity was manatee hunting, I say hunting but I mean spotting. Not that it matters because we didn’t do either as there were apparently none around at that time of day. There’s a point to this story, bear with me. Next on the agenda was lunch but there was nowhere in the village available and so we took a detour to the next village. We got fed around 4pm with stuffed fish and rice which was bloody lovely. With the day drawing to a close the crew turned the boat towards home. About half way home the crew started to look a bit unsettled and the revs on the boat started to drop for a while before the engine started to cough. It became apparent that our lunch detour hadn’t been accounted for when packing the days fuel and river petrol stations are a bit scarce in the massive wetlands of Cassamance. The whole affair was hilarious. The first boat we signaled for help was loaded with angry people who appeared to hate tourists. Luckily the second boat was more obliging to fill a water bottle with a bit of fuel for us. We finally rocked up at the campsite just after sunset, drums still in full swing.

Now this would normally be the end of today’s blog but I’m afraid there is more! On our return to the campsite, we had a few beers and supper around a fire on the beach. Some of the local guys then came and played drums and danced for us for a good half hour. We were then invited to a disco at the local friendly Senegalese Naval base. I say I but, I’m extremely confident that it was the girls they wanted to go. Unfortunately for them I went. Escorted by Sally and Holly. Now, I at least (being a wimp) had a problem because people are always told not to go out late at night and certainly not off main roads down through dark back yards and even darker fields. But after a risk assessment lasting a nanosecond we decided to do just that. We had a fantastic time. It’s tricky, play it safe and risk an experience or, take a risk and experience something new. The disco was full of young locals, the same age as the UK’s beer and vodka downing club goers. BUT, no one was drinking alcohol yet it was very much available. I know this because I was one of only three people that were drinking beer! Everyone was dancing and that was what it was about, dancing, both girls and guys. It was great to see, so much so that our ten minute visit lasted three hours, departing around 1.30am.

Days like that are fantastic and looking back you realize it only happened because you spontaneously said yes, whether it be climbing up a high tree, dancing around a camp fire or disappearing into the dark in the hope that you end up at a random party!

Senegal, with significant emphasis on Cassamance, I salute you.