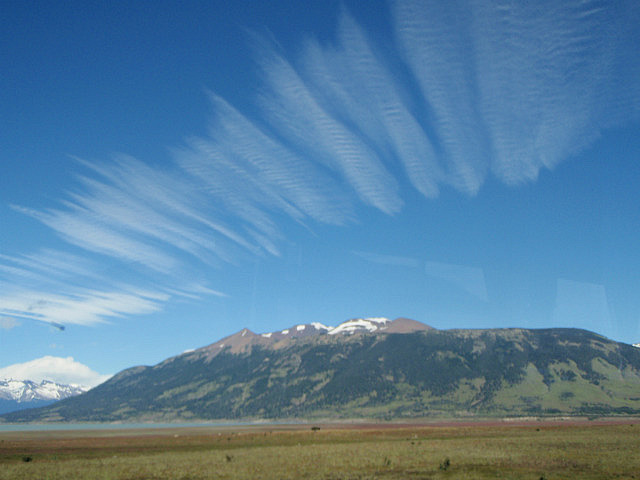 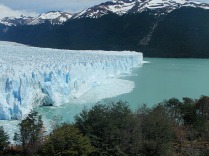 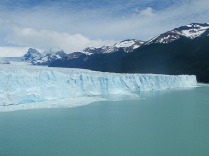 Lots and lots of ice

The last week has proven to be pretty awesome due to fanastic nights out, fantastic activities, mostly fantastic weather and spectacular surroundings. I wasn’t sure what to expect of Patagonia which is southern Argentina, I knew nothing about it other then it gets bloody windy. One minute we are driving for wholes day through barren plains completely void of trees and anything really. The next we are in some of the most beautiful mountain regions of the world. It’s definitely becoming one of my favourate places in the world. It is one of the least inhabited places on the planet and it is wild which I assume is why I love it down here.

Our first glaciar stop was at a national park in Chile where we treked up to a viewing platform where we could see a hanging glaciar which was sitting on the top of a mountain which was pretty damn awesome. We then headed to a little town in Argentina which was home to the Perito Moreno glaciar which I was very excited about because this was another place that Brian Cox had visited for Wonders of the Universe and I am SAD! But, it was bloody awesome, everyone loved it and the weather couldn’t have been better. The glaciar is Only 25sq km but its a rather active glaciar and we saw plenty of ice falling off the front of it. It’s most famous for being one of the few chunks of ice that is still growing and not receding. Every now and then it kind of blows up because of various reasons which will take me forever to explain. One of the great things about the day was that I managed it on two hours sleep after finally finding a place in Argentina to boogie the night before!

I will ellaborate further but I believe I’m about to get kicked out of the internet cafe as it’s closing time so I’ll write a bit more when I get chance. Starting a 50 mile walk tomorrow so may take a few days!

After Perito Moreno we headed to El Chalten which is a tiny town in the middle of nowhere and was to be our home for New year. It didn´t let us down. New years eve was spent ice climbing on the massive Viedma glacier which is approximately 95sq km in size. I´ve never been ice climbing before and it turned out that I was actually quite good at it which made me feel warm and fussy inside. It’s quite simple I suppose, you hack axes into the ice to haul you up with your arms and smash your spiked up feet into the ice to push yourself up with your legs. Repeat this process till you get to the top and don´t fall. I think what also helped is that I have learned to trust ropes a bit more and so on the times I did fall it was more amusing than pant wetting scary. We had a whole day on the ice, mostly climbing but with some hiking and it ended with a shot of baileys over glacier ice to kick off new year celebrations.

There isn´t much to say about New Years Eve night because I can´t remember much of it! All I know was that it was fantastic fun, Jamie spent most of the night sat on stairs and, I claimed to be a penguin farmer. Luckily I was feeling rather good the next day and so Pete and I got ourselves into gear and did a four hour hike into the surrounding Fitzroy mountains which was bloody beautiful and was a nice little warm up for our upcoming three day hike in Chile. We smashed out 22km in just over four hours which we were quite chuffed about but, I think we were driven by the knowledge that the burger and chips at the end would be awesome and we were hungry. I Love Patagonia!