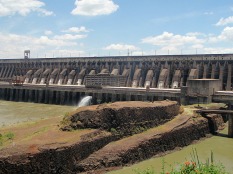 A spot of boating

Out with a splash.

Our last port of call in Argentina was Iguazu falls, rated as one of the top five waterfalls in the world. For me it was definitely the most beautiful set of waterfalls that I’ve seen but in terms of sheer power I think Victoria falls beats it, just. We had a whole day in the park which was pretty much needed to get around all the viewing platforms. It was scorching hot and the place was rammed with the stupidest tourists imaginable. I guess the same kind of tourists you find at the Pyramids or Stone Henge! Our day actually started with a little drive on an open top truck through a bit of jungle which was jolly but nothing too exciting. We then jumped onto a speedboat which was very exciting. The boat took us flying up the river, over rapids towards the falls where we got our first look. We were warned we may get wet and even received a dry bag to put our stuff in. We assumed the wet bit would come from the spray of the falls, what we didn’t realise was that they actually drove the frigging speedboat into one of the biggest falls. As we headed directly for the humungous heap of water falling from the sky I must confess I got a little scared. The same kind of fear you get when jumping off a bridge or fall into a grade five rapid. It was AWESOME! And totally unexpected. It does indeed go a bit wrong sometimes as a few unfortunate people discovered a few years back but safety can never be guaranteed. Essentially after that, the day was a casual affair witnessing some awesome views and ending with a leisurely raft trip along the river on the top side of the falls. We then nipped over the border to spend a few days on the Brazilian side of Iguazu falls.

I love helicopters, just love them, I basically think they’re super cool! On my travels I have learnt that if you are at one of nature’s awesome huge ass wonders of the world then you have to take to the skies and the results will never disappoint. The ride lasted only ten minutes but the views are incredible and you really appreciate the scale of things. Iguazu is huge. I still don’t have a photo which shows off the entire thing. I also didn’t realise how surrounded by rain forest it is.

A few of us then decided to go visit a dam a few kilometres out of town. This dam is called Itapúa, the largest hydroelectric dam in the world until the Chinese recently built a bigger one. It was built as a joint effort between Paraguay and Brazil and sits on their border (There is a point where Paraguay, Brazil and Argentina meet but I couldn’t be bothered to go). It produces 75% of Paraguay’s power and about 18% of Brazils. It’s huge. Six cement factories were built on site during its construction as was two ice factories. The ice was used in the concrete so it didn’t dry out too quick and crack. On completion they estimated it would take ninety days to fill the dam, it took just fourteen days thanks to the heaviest rains in forty years. It was a surprisingly good trip out with the only negative thing being that the huge flood gates weren’t open which would have been impressive.

So back to Argentina. She’s a confusing country and I can think of only this to sum her up. She is a poor, modern day country or, a modern day poor country. I really believe the UK could end up the same in years to come if we don’t sort out our economic mess. There are awesome and beautiful places but there are also places that are a complete dump. I also can’t see how any Argentine business can make money when they won’t sell me anything for four hours in the middle of the day so they can go have a nap. Ultimately though it’s a beautiful place from the glaciers on the west coast, Ushuaia, the vast emptiness of Patagonia, the incredible Buenos Aires and, the subtropical north. I don’t love it but I can’t recommend the place highly enough.

On entering my 40th country, Brazil, I can again be English and not be a little worried everywhere I go but, on the downside I don’t understand a bloody word of Portuguese. I’ve amazed myself at how use to Spanish I got after ten weeks here and I must admit, I miss it!