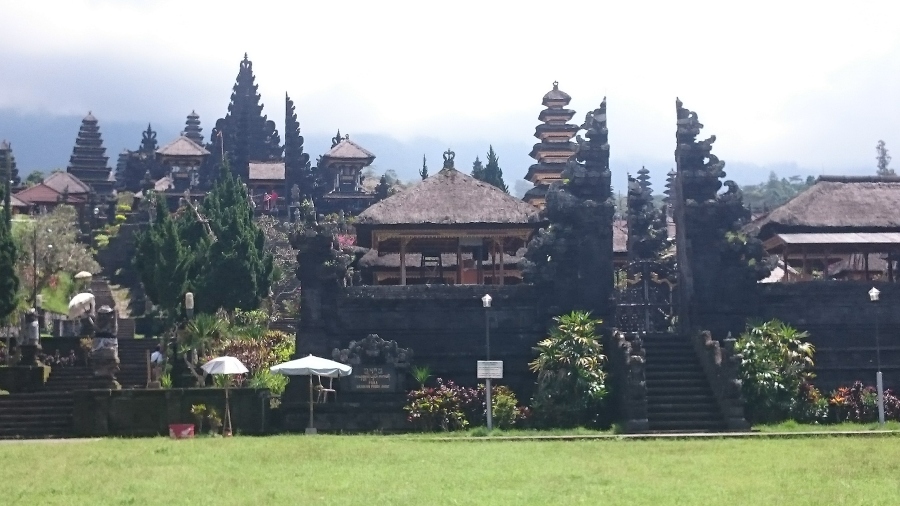 Being a hot, muggy country, it is only right that Indonesia should possess a heap of temples. In this instance it was ‘The mother Temple’ which was a large complex on the road out of Ubud. It was a rather smart place and offered awesome views of the surrounding countryside. We were also treated to a visit of a spice garden which had the entire contents of a supermarket spice isle, only still in plant form. It was also known for growing the odd coffee bean or two and took great pride (not sure if that’s the right word) in their poo based coffee. That’s right, there is a mighty beast that resembles a cat, kind of, which roams the forests of Bali eating coffee beans. However, they do not digest the coffee beans and so they pass straight through the bean eating beast which begs the question, why do they eat them in the first place? I was probably told this but wasn’t listening! People then collect the droppings full of undigested coffee beans, give them a wee wash down, roast them and turn them into drinkable coffee. Apparently being consumed once already offers a unique flavour. Naturally one member of the group wanted to try it and naturally that meant I had to try it. So what did it taste like? Coffee!!

Candidassa provided us with a lovely hotel on the beach where we hooked up with a further ten people joining us for the next leg of the journey and kicked that off with a ‘New moon eve’ party on the beach. It was buzzing with a huge crowd peaking at nine people on the beach dance floor at one point. It was again a warm night as proved by the fact I had to peel my t-shirt off at the end of the night after working up a sweat from excessive foot tapping and arm swinging aka dancing. Well my version of dancing anyway. Beforehand the day had been spent snorkelling and by pure chance we got to see a turtle which is something I’ve never seen before so I was pretty chuffed. I quite enjoy snorkelling and have been convinced that I need to give scuba diving a go but I will discuss this further next time.

We left Candidassa, hopped on a ferry and headed over to Lombok, an island that our guide described as being like Bali thirty years ago. This is internationally recognised as somewhere which is still more akin to the local people than the tourist which, for me is fantastic news. Lombok has proved to be completely different to Bali, very relaxed and peaceful with a lot less touristy bullshit and some stunning scenery. Lombok has also now cemented itself in the ‘trigstory’ books as the place where I discovered a new passion, surfing! I have no idea why I have never been surfing before, I think it is one of those sports which I think I would be crap at. In all honesty I am crap at it. BUT, I was standing on the board, in the sea, in front of a wave within the first hour of our lesson. We all were pretty much. I loved every second of it! My conclusion to it all was that my surfing will end up like my skiing, all balls and no technique, so I will be able to do it pretty well but if I was to stand back and watch myself surf or ski I believe I would look like Bambi on ice being chased by Elmer Fudd. The beach was stunning which also added to the sense of occasion.

I’m now well and truly back on the food and I have found bamboo shoots to be particularly tasty which then lead to a very informed debate about panda bears. We were also made aware of an extremely tasty snack consisting of chocolate and cheese and, for good measure I had a bit of banana with it as well. It’s like a hot sticky cake type thing, absolutely delicious, so much so that I eat it before I had chance to take a photo. I did say cheese!

Finally, ending on an old man travelling rant, I have drank a lot less beer on this trip and I have found out why. Wifi. In the olden days before Wifi, the typical group of traveller friends would have nothing better to do than go to the bar. Conversation would start sluggish on some days and so another beer was had, if conversation continued to be sluggish than another beer was consumed, eventually enough beer was consumed to trigger a full late night assault of the bar. This applied everywhere and was irrespective of the number of people in the bar or, the size of the bar. Nowadays to fill any lack of conversation everyone gets on the Wifi and drinks fruit juice! What’s that all about!? Fruit juice!!