Trying to pack two fun filled weeks in Sri Lanka into three blogs is proving difficult but, there is always time to big up the merits of group travel. We returned to the cottage from our seven hour night hike on Adams Peak around breakfast time. Naturally a beer was in order which, at 9am, unsurprisingly only one other joined me. However, with the day free to relax and thunderstorms imminent it soon became apparent that the whole day should be spent relaxing over beers and G&T’s kicking off at breakfast time and ending around 9pm when we were all well and truly ready for bed. A core group remained while the rest of the group came and went throughout the day joining us for a few cheeky drinks in between having a nap or exploring the local area in between torrential downpours. It summed up the spirit of the group for the whole two weeks with every last person being very sociable with bottles of gin floating around more often than we would care to admit!

Horton Plains sits at over 2,000 meters up in the central highlands. A bit foresty, a bit grass plainy, it is well worth a visit. A protected national park, all visitors have their bags checked for any plastics that could litter the environment which I thought was kind of cute even if it did mean leaving the Haribo back on the bus. The main circular walk takes around three hours to complete with the highlight being Worlds End. Although not quite as dramatic as it sounds, if you fell off the edge you would very much die, something that is surprisingly more common than one would like to acknowledge. Worlds End is a 1,200m (4,000ft) sheer drop off a cliff with a handy viewing platform but no safety rails. But don’t worry about that, the view is insane. Also, for those of a nervous disposition you can give mini Worlds End a go which offers the same incredible views on the same care free platform but at a much more agreeable height and sheer drop of only 300 meters.

After a cheeky lunch in the corner of a local shop we made our way to a train station which would take us to Ella. This was to be no ordinary train if every single bit of Travel Legend is read, seen, and believed. This is supposed to be one of the most amazing train rides on the planet with more magic than the Hogwarts express. Was it so? It’s a bloody train! An overcrowded train full of locals going about their daily business and an equal number of backpackers that looked on in amazement as though they have never been on a train before or seen locals use them. Although it rained for the entire journey and I spent it all on the less favourable side of the carriage looking up a hill instead of down into the valley, I have to say it was beautiful. But, this is Sri Lanka, everywhere you look is beautiful. Also, and I hate to admit this because it is a very backpacker thing to do, I was very keen to get to an open doorway and watch the world go by with the wind in my face. Lets be honest, there isn’t a train in the UK which will allow you to open the door and stand on the edge while it’s travelling along! The town of Ella, according to the Lonely Planet (probably) is the Hogwarts at the end of the track but Lonely Planet would say that because Ella was surprisingly internationally backpackery. So lots of hipsters walking around with backpacks on, lots of couples sat in restaurants on their phones not talking to each other and, a couple of huge restaurants that serve burgers, pizzas and, Heineken and can be found in all good backpacker locations such as Bali, Thailand and the Gold Coast. It saddened me a little because I had finally witnessed a little bit of Sri Lanka succumb to the needs of the modern backpacker. Ella’s natural surroundings? Sat at 1,000 meters surrounded by dramatic hills, it was simply stunning and a walk up into said hills the following day was an absolute treat to the eyes. Most definitely a place to go out and explore.

Heading south we dropped into Yala national park, a honey mooners paradise who dare not visit Africa. With one of the densest Leopard populations in the world many people on the trip were excited about the prospect of seeing one of these beautiful creatures. Me, being a pessimist (but an experienced pessimist) was less excited. After spending ten weeks travelling East Africa, I had only one opportunity to capture a good photo of a leopard and I got a glimpse of one on another occasion. Ten weeks! If we were to see one in the next three hours, we would be incredibly lucky. Alas we were left disappointed. Yet, as with most game drives it was still wonderful to be out and about and we were treated to elephants, water buffalo, wild pigs, wild chickens, crocodiles, deer things, and a heap of birdlife. So all in all, not bad! It’s worthy of note here that Yala was badly hit by the 2005 Boxing day Tsunami. In fact Sri Lanka lost over 25,000 lives that day, the majority of which were along the south coast that we were now travelling.

With the tour nearing its end we spent the next few days heading along the coast where we were treated to a dip in the warm Indian Ocean, superb beaches, Blue whales, dolphins and, some huge thunderstorms. A highlight for me though, was watching a group of young lads play street cricket in a carpark. The wicket they were bowling at was next to the road. If the batsman hit the ball, it went off towards the Indian Ocean. If he missed the ball, it went flying into traffic that passed by on the main southern coastal road. The wicket keeper would then run through the slowly passing cars to retrieve the ball. They had some consideration for the traffic as the ball was a tennis ball, not a cricket ball! The cricket theme continued when we visited Galle a few days later. Unfortunately we only spent one incredibly hot morning walking around the old colonial fort at Galle. Inside the old fort walls are many old narrow streets full of funky restaurants, trinket shops and old colonial buildings. Even better, it was New years day and so everywhere was relatively quiet. The difference between here and Ella was that although Galle catered for tourists, it had managed to keep its historical charm. I wish we had spent the evening there as well as I could happily of eaten and drank my way around for a good twenty four hours! As for the cricket, anywhere that was flat, grass or concrete, in and around the fort, children had set up a cricket match, they love it!

As I have already touched on, the one curve ball that Sri Lanka threw my way was that they celebrated New Year on our last weekend. Over a two day period all sales of alcohol was banned, taking into account this was over the last two nights of the tour before I went back to Saudi Arabia for seven weeks! I therefore beforehand stocked up with a slab of beer while others stocked up on gin. The problem was we couldn’t openly consume it in the hotel. Gin is easy to disguise in a water bottle but beer? No worries! The hotel manager gave us a tea pot and so for the rest of the night I would go up to my room, fill the tea pot with beer, come back to the lounge and top up everyones tea cup! On arriving to Sri Lanka two weeks ago I mentioned I was knackered and ready for a holiday. I can now safely say I am more knackered, and ready to get back to work, regular home cooked meals, sleep, prohibition and of course cows! An incredible country, super friendly locals, a brilliant group of fellow travellers and a superb balance of hiking, culture and socialising. It took me far too long to visit but, my oh my was it worth the wait!

The train to Ella 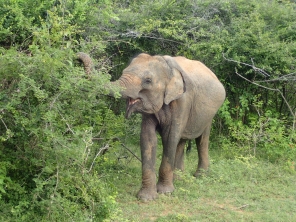 An elephant eating a bush

A cow in the bath 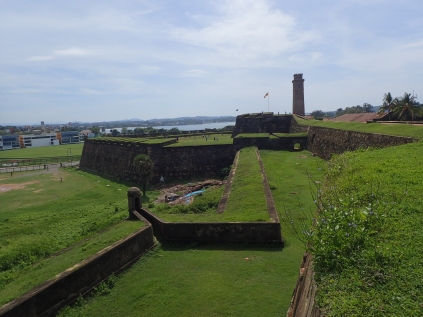 Galle and the sea

A beach and warm Indian Ocean

One thought on “Galle, Sri Lanka”