I’ve never been in any rush to travel the cities of Europe. Firstly I’m not a big fan of cities and secondly I haven’t got to the age where I appreciate spending the remaining hours of my life in an art gallery, museum or antique house. Don’t get me wrong, I can handle these in small doses but I must regularly be supplemented with alcohol in order to maximise the joy of the experience. As per usual, group travel came to my rescue in that once again I met a great wee group of people who added great company in some of the worlds most beautiful cities. Travelling there on my own I think I would probably have regretted not waiting for another forty years. Although on saying that it is getting increasingly scary how I can rock up in a country and meet someone there who I have travelled with before. On this occasion someone I travelled with in Greece, someone I climbed Kilimanjaro with and, someone who used to serve me generous helpings of beer in my local Dorset pub, the Acorn Inn, go there it’s wonderful. Although if I’m honest the latter person I didn’t get chance to meet because he was off playing soldiers with the Czech army. Anyway I digress!

Munich! Not got much to say really as I spent less than twenty four hours there but I shall be returning shortly for a little known beer festival. All I have to say is that I sat on a hard wooden bench at a big, solid, wooden table where I was bluntly served meat and beer. As we all know, Germany has a no nonsense, get on with it attitude and I think it’s grand, even if I do want to punch a waiter with absolutely no customer service skills from time to time. As it turns out, central Europe would provide plenty of no nonsense hospitality.

There has been a lot of discussion about Brits loosing free movement within Europe. I am being very simplistic here but I was the only Brit on tour and all my fellow Kiwis, Aussies, Americans and Canadians who are not part of the EU crossed the border from Germany to the Czech Republic without having to show ID of any sort. So I’m not sure what all the fuss is about because I also know many Aussies and Americans working in Europe but hey I’m a simple dairy farmer. Returning to more serious issues, me! It was a five hour bus journey from Munich to Prague. I had been to Prague before, over ten years ago as part of a 21st birthday party. Being easily distracted at that age we were easy prey for anyone who invited us into their bar with the promise of cheap beer and semi naked women. Now, slightly wiser it was just the promise of cheap beer that distracted me. Prague was as beautiful as I remember it, truly one of the most beautiful cities on the planet. Beautiful buildings (Not bombed during the war because Hitler protected Prague he loved it so), a stunning castle dominating the skyline, trams, a big river flowing through the heart of the city and a bridge that featured in Mission Impossible. What more could you want from a city? Even the hoards of tourists didn’t dampen my spirits. I spent two jolly days walking in the sun, drinking great beer, eating great food and sleeping in the park by the river. At the time you would never have guessed I don’t like cities. I have three highlights to discuss, all in one day and all revolving around beer.

It had been an eventful day, we went to the castle, we had lunch, went to the best sweetshop ever, took a nap by the river and then headed to a museum. A beer museum. Or as we English call it, a pub. I’m not sure what the definition of a museum is in Czech but in this instance apparently it was for an establishment that sells over thirty drought beers. Taking our seats at the table we pondered how to get served. Beer was appearing at tables but we were unsure how to order as none of the waiters took a blind bit of notice of us. We went to the bar, where the till was and still we were ignored and so after clocking another table placing what looked like to be an order, we went back to our table and patiently waited. Eventually the most miserable and drab man on the planet appeared and grumpily took our order as though it was the most painful experience of his year. But to be fair on the chap we were getting accustomed to such service. However, something quite unexpected happened as we enjoyed our mid afternoon hoppy beverages watching the pub slowly thin out. The waiter began to smile and interact with us, why we couldn’t keep him away at one point as he chatted away about beer, beer mats and coins. It would appear he actually loved his job so long as he wasn’t doing it.

The next highlight of the day was a trip to a building that apparently resembles the shape of a dancer. Not one to possess much of an imagination this little fact was lost on me as I walked into the lobby to take the lift to the top floor. Awaiting me was a little bar and just beyond that lay an outdoor viewing deck offering fantastic views of the city as the sun set. The downside was we had to buy a drink if we wanted to go out on the deck and so oh so very painfully I ordered a G&T as it seemed an appropriate drink for a city sunset and made my way outside. I see spectacular sunsets every day at work but I must admit it was nice to watch Prague pass from day to night and there is always something very peaceful about watching the sun dip behind the horizon. Amazingly the place wasn’t over full with tourists either which was a huge added bonus. With the sun safely behind us for another day we put our third and final plan into action, navigating our way to ‘the oldest beer hall’ in Prague. I can’t verify this claim but it certainly wasn’t a new establishment. From the outside this place looked nothing special but when we entered it opened into a huge complex of side rooms and a large outdoor dinning area that kind of resembled a medieval town square complete with trees and all. The place was full but we were kindly pointed towards an empty table in the corner with the usual compliment of hard wooden benches. Barely after we had sat down a man appeared with a tray full of dark beer and dropped five glasses down on our table. It didn’t matter if you liked dark beer or not as it didn’t appear there was an option for anything else. This chappy appeared rather regular and was all to eager to replace your empty glass. There was no smile or banter with the efficient service but when beer is appearing without the use of communication then all is said and done. The food was typical central European food. Meat, gravy, dumplings and vegetables although to be fair we did find a rather nice greek salad for a starter. My roommate was a rather straight to the point kinda guy as all retired people tend to be and he decided to ask our waiter why he looked so miserable to which he simply replied by smiling and revealing an intricate network of shiny braces attached to his teeth. What with that and his demented smile he looked as though this was just a part time job when not out fighting 007. 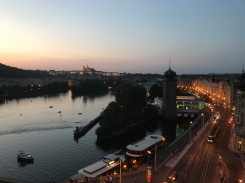 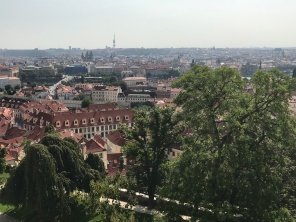 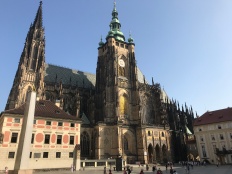