A Tale of Two Cities.

The title isn’t a coincidence, I did steal it from another little known writer, Mr Dickens. It’s supposed to be a good book which I intend to read one day. Not that it has anything to do with the following topic of conversation. Writing about Cesky Krumlov left me feeling like I wanted to be a little bit sick, like I had to go and scrub myself down after describing being so happy in a little European tourist town. But no matter, normal service resumes as we took a short ride and crossed the border into Austria and our next destination, Vienna. I won’t hold back. Vienna was a disappointment. Maybe I expected too much. It didn’t help that one building I was genuinely keen to see was actually waiting for me in Budapest and not Vienna as I originally thought. Within an hour of entering Austria we were shouted at. Stopping for a pee at a service station it was apparent that we were not allowed to use the public bathroom. I have no idea what we needed to do to be allowed a pee and we were not given opportunity to find out as we were flatly denied access, accept for my roommate who had been first though the door and had either got past the miserable Austrian undetected or he played the ‘I’m retired thus I’ll do as I like’ card. It shouldn’t, but episodes like this really make me angry and will immediately cause the country in question to be put in the sin bin. Don’t get me wrong, it wasn’t wide spread but all too often the service made me feel like the group and I weren’t welcome. One evening we went to the fair in Vienna, pretty much just to go on the Austrian equivalent of the London Eye. It was quirky to say the least as it simply looked like a load of garden sheds attached to a giant fairground wheel. If you were really fancy you could hire a shed and enjoy a meal as you went around and round with lots of people watching you from all angles from their own garden sheds. You would think such an attraction would allow you to pay by card but oh no no no. Cash only my friends. I have travelled many countries where cash is still king but my own country now allows me to pay with the tap of a card or even my phone. Austria I was led to believe is an advanced European country and so I was slightly miffed that half of us had to scramble for actual real money to pay for one of the main attractions in a European capital city.

The city itself was nothing special. It was overcast and wet which didn’t help its cause admittedly but it just didn’t stand out for me. It had the same old wonderful architecture but the city appears to be rather flat with no standout features and everything just feels a bit claustrophobic. You can even smoke in the bars. Obviously a lot of people will rejoice in that news but I couldn’t help but think of all the modern cities in the world that have banned smoking in the work place yet Vienna and Austria, well they don’t really want to because smoking is just so damn fun for everyone. But apparently it’s Britain that wants to go back to the Stone Age. So that pissed me off as well as I sipped away on €12 cocktails in smoke filled rooms with waiters wanting payment immediately because they were about to change shift. What’s that all about? Take card? Of course you don’t. No worries I’ll pay with silver bullion.

There are some good things about Vienna worthy of a mention. Firstly there is ye ode palace that that famous person lived at for many years. I can’t remember now but I would recommend a visit. We took a one hour self guided walking tour around some of the main rooms of the palace and to be fair the audio was all very interesting with the number of tourists just about manageable. Afterwards we headed out to the gardens and made our way up to what is probably the worlds largest conservatory. We never did find out what it officially was but it offered superb views of the palace and the city behind. Well, superb for Vienna at least. Being with a bunch of girls there often becomes times when they need to pee. Can you guess where we are going? The worlds biggest conservatory had a tea room but we didn’t want tea, we wanted to head back into the city for a beer and a good feed. But the cafe had toilets that were needed and low and behold we couldn’t use them unless we were staying for a cuppa which, I guess is more reasonable than not being allowed the bathroom at a service station. So with an order of €5 coffees and hot chocolates the pee situation was resolved.

The definite highlight of Vienna, as promised, was the schnitzel. Of course a lot of people associate this with Germany yet our excellent Italian leader assured us the best schnitzel was to be found in Vienna and he was very much correct. We were taken to a lovely little restaurant where as in typical fashion plates were put in front of us. The plate was covered in one huge schnitzel and that was it. A breaded slab of veal so juicy and scrumptious it makes my mouth water now. If my memory serves me right I’ve never had veal before and it would appear I’ve been missing out. Although if the Austrians are as up to date on animal welfare as they are human welfare than I probably should have refrained from enjoying it but that is a topic for another day. The final highlight of Vienna was leaving for Budapest.

Budapest is only a few hours drive away from Vienna and did you know it’s not pronounced Budapest but Budapesht. True story. Back in the old days two towns, Buda and Pest joined to become what it is today, a mighty fine, beautiful, fun, buzzing capital city. I had heard a lot about the place and it was pretty instant why this city is getting such rave reviews. Essentially I would describe it as the younger, more fun and laid back city of the European family. A city which isn’t choking on its own pomped up self importance, architecture, art and all the other classical nonsense. Budapest has all that of course which makes it visually stunning but it doesn’t feel like it takes itself too seriously. Unfortunately I was there for only eighteen hours but I feel I made the most of my time. In a single afternoon we took in the views of parliament which took gothic parliament buildings to a whole new level. We then walked up to Fishermans Bastion which looked a little like something out of a fairytale and offered great views of the city. Somewhere around this location we were led inside and down into the innards of some old building where we finally ended up in a dark brick cellar. Far from being miserable it was in fact a nice little wine bar (that could seat no more than twenty people or so) where we took the opportunity to try five different Hungarian wines. As per usual I couldn’t really tell the difference between the wines other than colour but as per usual I enjoyed myself with the location being a definite winner. A handful of us then made a dash for one of the many spas that are dotted around the city. With only a few hours before we had to get to our final dinner and with me not having any swim shorts we were really quite optimistic in hindsight. It was all worth the effort once we had purchased tickets (and I shorts) and we’d finally worked out how the changing rooms and lockers all worked. I never did figure out how to get a towel. The exchange of money and deposits all appeared very complicated and so after my swim I kind of shook myself off like a dog, got changed and headed off. In fact after queuing for a towel for so long I had pretty much dried off by the time I decided to give up. The pools themselves were alright. Worth a quick visit and with a bit more time, beer and sun it could have been a very nice afternoon. Plus we only discovered about half of the pools that were on offer.

After our final group meal there was a plan to go for an evening river cruise but I think it’s fair to say we were running out of steam and so we jumped a step and headed to one of Budapest many Ruin bars. The best way to describe them are that they are bars designed for hippies but filled with well, you and I! They will be in large, old, crumbly buildings that are unlikely to pass any health and safety test. They will have various rooms indoors and out where you can drink, eat, dance, smoke etc. The walls are covered in graffiti and there will be random crap everywhere. But…. they are bloody awesome. Just like the city itself, they don’t take themselves seriously, have a fantastic atmosphere and are iconic. And with that a nine day spin through Central Europe came to an end. What did I learn? Prague is the wise and well respected Grandparent. Vienna is the evil well to do step mother while Budapest is the well travelled, cool uncle. Simple. 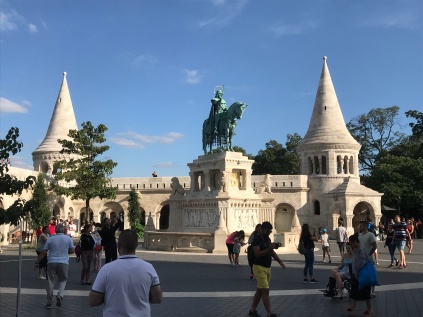 The building that isn’t actually in Vienna! 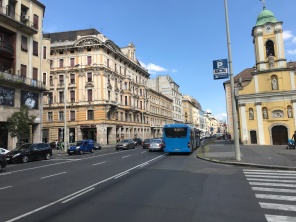 A shed on a wheel 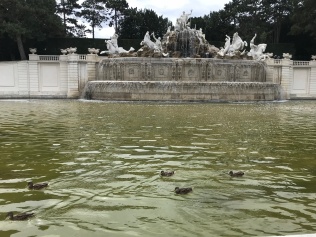 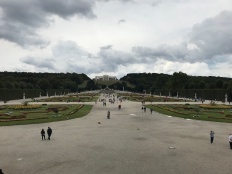 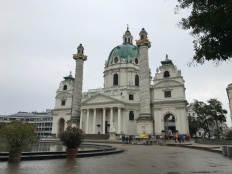