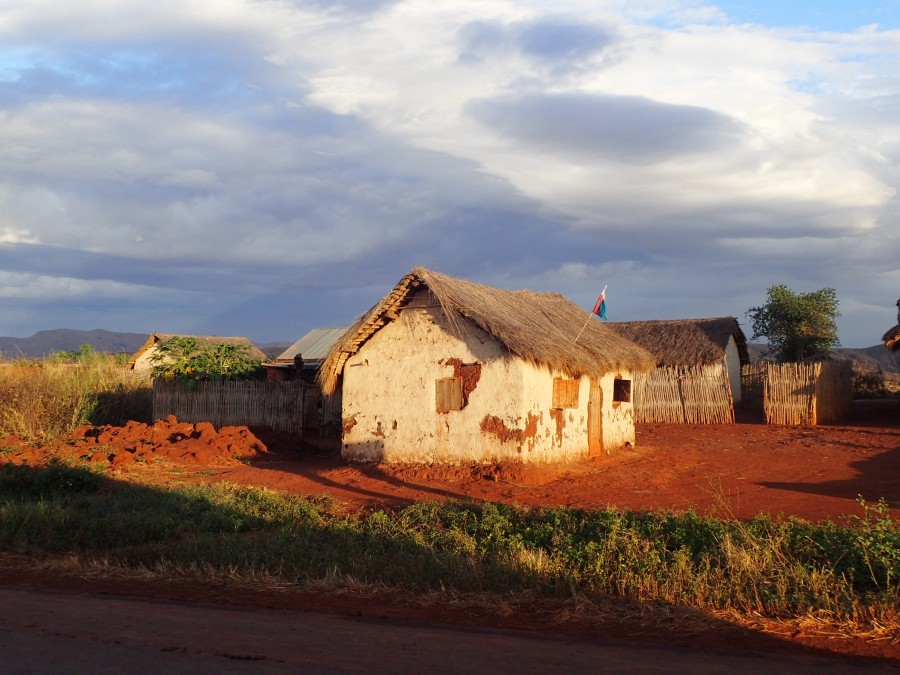 There are three things I aspire to in life. The first is to fall in love with a hottie and live happily ever after, the second is to succeed in my career and the third is to be well travelled. I feel I am well on the way to achieving two of these, although bosses new and old may say otherwise! Unfortunately, for me this all usually involves a lot of air travel which I demonstrated in spectacular fashion on this occasion by travelling to three continents in two weeks and raking up 19,390 air miles in a bid for the aspirational hat trick. As someone who cares about the environment this is a tad hypocritical yet I fail to see what air travel has to do with the complete and utter annihilation of every tree upon the planet for largely commercial gain and or lack of sustainable development. And if supermarkets can fly fruit and veg around the world daily on the assumption people can’t live with seasonality then I can fly across the Atlantic on a whim.

And this is how it was. I boarded my flight in Riyadh, leaving a country which has used 70% of it’s fresh water in the past forty years and flew onto Istanbul which is presided over by a dictator. From here I flew via Sao Paulo, one of the biggest cities in the world eating away at the surrounding forrest and then down to Buenos Aires, the capital of a country that is happily chopping down the rain forrest to provide cheap beef and soya to Europe and beyond (as with Brazil). I find it slightly ironic that during my brief three day stay in Buenos Aires the electricity went off for almost all of Argentina and Uruguay for around 18 hours. So far we have countries with no water, no democracy and no power! So on I continued to Madagascar via Johannesburg, from one country still struggling with equality to one that is desperately clinging on to survival.

I won’t beat around the bush! Madagascar has nothing. Everything you think you know of Madagascar which lets face it is only the image of angry penguins driving ships is, can you believe it – wrong! On the other hand if like me you have watched or read anything by Simon Reeve you will get the sense that actually Madagascar sounds like an environmental catastrophe. It is. I only travelled on land through the centre of the country from the capital to the west coast and the island is the 4th biggest in the world and so I didn’t see a huge amount of the country. But, I did fly the length of the country and looking down from 35,000 feet all that could be seen was bare land dotted with fires and carved up by murky brown rivers. The smoke is largely through slash and burn farming, the brown rivers is down to soil erosion.

I love Africa, and Madagascar is no different. To say she has nothing is a harsh statement but her long term prospects do not look good. With the population growing by almost 1 million every year, no trees, degrading soils, little infrastructure for locals or sustainable tourism, and a natural beauty that has been all but wiped out and I am struggling to justify telling people to go. Yet that defeats the purpose of travel, there is always a reason to visit a country, even beyond the social and environmental politics a great reason to see a country can always be found. For Madagascar it really is quite literally all about the journey where getting anywhere takes time, patience, a strong spine and, in many cases a 4×4. This is the kind of adventure I was looking for in East and West Africa yet the Chinese had already built numerous roads but this isn’t the case in Madagascar with the few key tourist attractions lying at the end of a long dusty un-paved track. It was this that would make the country such a wonderful and memorable place to visit. In fact thats a lie, there’s plenty more that makes it so rewarding.

Landing at the airport in Antananarivo (Tana) is a standard affair. Get through arrivals, go the nearest guy that says ‘taxi’ who will then escort you past all the taxis waiting outside and usher you into a random car. In this case the car had a taxi sign on top which he promptly removed as soon as I threw my bag in the car. I think I am yet to get an official taxi from an airport in an African country. Tana itself, is like many African towns,  crazy busy with people lining the streets selling everything you could ever want only its all broken down into basic components, but no bother there will undoubtedly be someone around the corner who can make you anything you want! What sets Tana apart is the random cobbled streets, the numerous baguette stalls, the Renault 4 and Citroen 2CV taxis filling the roads. On the higher ground sit old French colonial buildings slowly falling into disrepair yet all of it paints a very clear picture of past French occupation. The locals themselves are like a packet of Haribo star mix made up of black Africans from the continent, Asian Asians, Arabic Arabs, a mix of the two or a mix of the three. Some of the women even dress as though they have come straight out of Bolivia, I kid you not. All are kind and welcoming and at no point were you made to feel unsettled, even when being escorted by armed guard across the country (more on that later).

Not being a city kinda guy I was happy to be leaving Tana the following day which was to take us inland to the town of Miandrivazo. The ten hour drive took us along a paved road that got progressively worse as we left the capital behind us. The weather was also surprisingly cold and damp which I wasn’t expecting as Madagascar is in the tropics but when I consulted the map again a chunk of the country actually sits on the edge of the Tropic of Capricorn. I don’t mind a good road trip somewhere exciting but I was relieved to get to our final destination which boasted a lovely room, a fully stocked bar and a decent bit of grub. Incidentally the beer is very refreshing and the locals eat rice three times a day although we appeared to eat more pasta, meat and veg. All of which was very good. Zebu is their meat of choice which is simply the local cow and happens to be very tasty. Again, rather ironically they are the cause of much devestation in the country! Miandrivazo we simply drove through as the only reason to be there was to prepare for a three day boating trip down the Tsiribihina River which would lead us to the west coast and two of the major tourist attractions in the country.

Arriving at the river bank the following morning the weather had heated up significantly and would stay that way for our entire time on the west side of the island. Getting off the minibus we were immediately overrun by a mob of children to the sound of ‘foto’, ‘foto’, ‘foto’. Only in Africa do you experience such scenes where children just want a picture of themselves and their mates and to be able to look at it on a digital screen. Top tip, take a polaroid camera to Africa for such occasions. That and a football! I had neither and so the the digital camera had to do. I hate taking pictures of the locals because I don’t want to deal with the reaction, either negative or positive however, we had no choice here and there are few places in the world where locals demand a picture and for nothing in return. Every village we visited we were greeted the same and every village we visited was made from mud and sticks but the kids always looked super happy and well…. free range. On several occasions our Madagascan guide was asked if the children were genuinely happy and he said that they were and I genuinely believed him. Certainly the evidence was there. Of course they have very little to worry about at that age but it begs the question – why do children with literally nothing but a t-shirt on their back, no shoes, a mud hut for shelter, a high risk of disease and virtually no electricity appear so happy when apparently all the children in the West are getting so depressed? It certainly gave us plenty to mull over once we boarded the boat and cracked open our first beer at 11.30am. 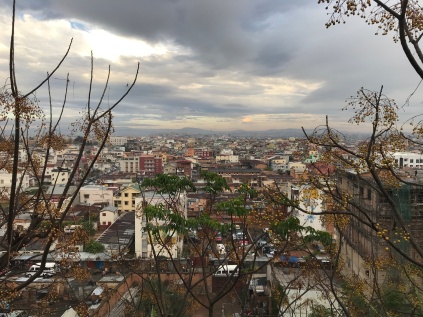 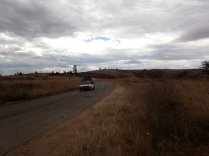 I didn’t realise when I was taking the picture but there are pigs on the roof! 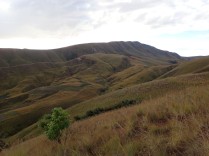 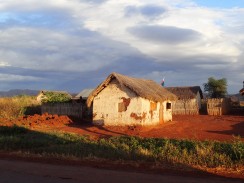 A house with a flag 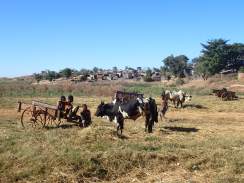 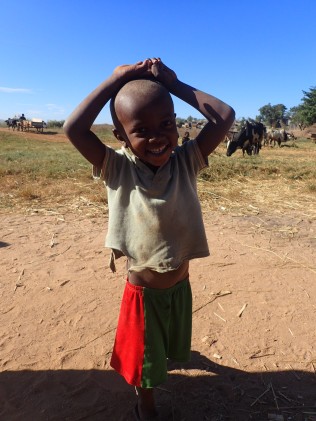 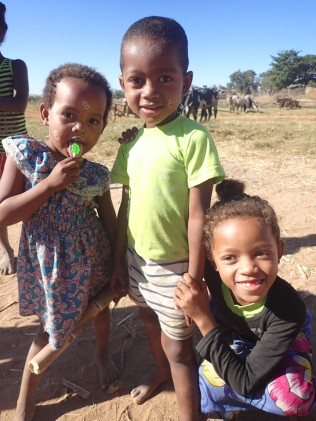 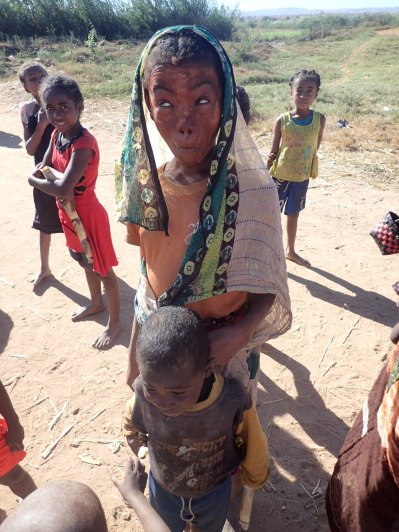 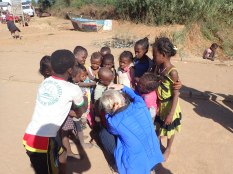 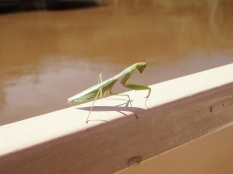 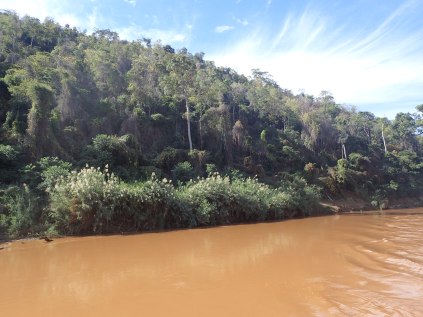 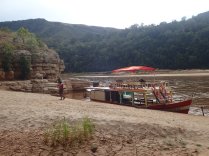 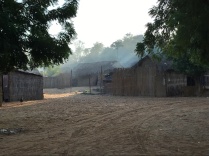 One thought on “Western Hypocrisy”