Our final day in Alice Springs was a busy one starting at Uluru for sunrise at 5am followed by breakfast and a 7km hike around the base of the monolith. We finally arrived back in town late in the afternoon giving us enough time to prepare for the next day and enjoy a few cheeky farewell beers before starting the whole process again the following morning. The ‘process’ was starting another tour at 5.30 the following morning, another two night, three day adventure this time heading across to Cairns on the northeast coast and a journey of 2,067km. You may be asking why the tours and why the rush? You can’t experience a country from the air and so that means driving. We were super keen to go overland from Alice Springs to Cairns but the roads are largely dirt and gravel and some instances get washed away in heavy rains and so the easiest and safest option is to go with someone who knows what they are doing. In only fourteen days we had made our way from Sydney to Melbourne to Adelaide via The Great Ocean Road and up to Alice Springs and taking in all the sites we could manage. It had been an epic two weeks, carried out at pace and although our plans were ambitious we were determined to see them through. The chap to lead us through this next stage was Alan, quite possibly the nicest guy alive who spent his days driving his fortified bus across the barren deserts of Queensland and the Northern Territory. What he didn’t know about these regions wasn’t worth knowing. As soon as we left Alice Springs we saw nothing, nada. It was flat and as barren as anywhere could possibly be. The highlight of the morning was a 200 year old termite mound and trying to eat a sandwich amongst a swarm of flies in 44oC. This was cattle country and we were passing through cattle stations the size of countries. We drove through one that was 3 million acres, right now we were on a ‘nothing walk’ on a 1.8 million acre cattle station and Alan filled our empty heads with facts about the vastness of this country.

1 – The Northern Territory is five times bigger than the U.K. with a population of only 200,000 people.
2 – The largest cattle station (farm) in Australia is the size of Belgium
3 – By mass there are more termites in Australia than cattle
4 – Some cattle stations hadn’t seen rain for five years
5 – Boulia Shire with a population of 600 people is 1.5 times bigger than Switzerland
6 – Australia is the only place in the world where camels roam wild
7 – The same Japanese fleet that attacked Pearl Harbour attacked Darwin six weeks later and dropped twice as many bombs
8 – It costs $350/hr to hire a guy with a helicopter to round up (muster) cattle. It’s so dangerous that pilots can’t get insurance
9 – One road train will carry approximately 140 cows (3 trailers) at a cost of $7,000 for 1,000km (In case you needed to know!)
10 – Queensland And Northern Territory Arial Service = QANTAS

We spent our first night in the vastness on a working cattle station where the owners threw us into the back of utes and drove us out to a sand dune where we sat to watch the sunset although the highlight of the evening was a home-cooked meal. If there is one thing I would learn to miss when on the road travelling, it’s a proper home-cooked feed. This tour was all about smashing out the k’s but Alan always made sure we stopped at anything that would be of interest and so after a 6.30am start, by 10.45am we found ourselves in possession of an ice cold XXXX beer at the Middleton Pub manned by a character that had clearly never left this remote stretch of outback. A BBQ soon followed. In Australia there is never an excuse not to have a cold glass on hand to pour a cold beer into or not have a good feed outdoors. Distance and remoteness are the weakest of excuses.

Our next stop of any significance was Winton which could boast to being the birth place of Australia’s unofficial national anthem ‘Waltzing Matilda’ and their national airline QANTAS. It’s also known for dinosaurs apparently but Alan was less interested in that and more keen for us to visit the museum dedicated to Waltzing Matilda and outback life. I’ve touched on this already but Australia has this amazing ability to make something that should be tedious and boring translate into something exhilarating. Maybe this is a slight exaggeration but seriously this museum was wonderfully cute and interesting. The only tourists must surely be the ones that Alan brings on his way through twice a week but an hour of looking around flew by and was full of stories, photos and displays about life in the outback and lets face it we all want to know why anyone would want to live in such a beautiful but hauntingly remote part of the world. Ironically I can’t recall much about the song Waltzing Matilda but it’s about a man in the outback with his swag making a cuppa tea basically. As with all national treasures it tells a story of times gone by with a romance that we all apparently yearn for today, simpler times, peaceful times.

The change of pace of this tour had been welcomed by the three of us after a fast paced, alcohol fuelled couple of weeks and we enjoyed the small, well behaved group as we rested during the long hours on the road. Even so I woke at 5.30am on the final day of the trip with a sly headache after a few too many cheeky beers in the small country hotel the night before. Taking into account that in previous days we had passed through areas which hadn’t received rain for years, today we were heading out on a road that had been closed for the past two weeks because of flooding and in places it had been washed away. As such the scenery changed dramatically from the endless flat deserts of the interior to more and more greenery until we were passing past fields full of sugar cane and tropical rain forest. Did you know that the far northeast of Australia is home to some of the oldest rainforest in the world yet it only covers 0.08% of Australia’s landmass? Unfortunately we didn’t get chance to head up to Cape Tribulation but after an impressive photo stop at Porcupine Gorge we had a taste of what the rainforests are like down in Wooroonooran National Park. Trekking through the trees Alan pointed out plants that reacted to our touch and then took us onto Nandroya Falls for a refreshing swim which was much welcomed after walking through what must have almost been 100% humidity. We finally rolled into Cairns early in the evening after our 2,000km, dusty, sweaty, deserted, fly ridden road trip and agreed we couldn’t have asked for any better. Cairns was the start of the legendary ‘East Coast’, it marked the halfway point of our trip and from this point on we would be heading back to Sydney before returning to Perth and back to the U.K. Yet it felt liked we had already peaked with our entire time between Adelaide to Alice Springs to Cairns far exceeding anything we had hoped to experience during our time in the outback. It is an incredibly beautiful and peaceful part of the world, hot and unforgiving as most of the best things in life usually are!

Opera house done, Uluru done, there was only one more needed for the ultimate Australian hat-trick, The Great Barrier Reef. You don’t need to visit any of these to have a damn good time which is good news if you are short on time as they are thousands of kilometres apart from each other. Granted the Barrier Reef is 2,300km long, stretching along a sizeable length of eastern Australia but it is likely that you will want to head north to Cairns for some of the most known spots. Surprisingly it didn’t stop raining on our first day in Cairns and we started to worry about our trip to the reef the following day. As always time was against us and we had even splashed out for a more expensive boat tour that promised less people and more comfort. As luck would have it the weather did clear and the boat lived up to its promise with only 28 passengers onboard a vessel capable of carrying 120. The boat was brand new, the crew were fantastic, the all inclusive food was yummy and we even got collected and returned to our hostel. The highlight of such a great trip on one of the most iconic natural landscapes on the planet? A photo of Phil fast asleep on one of the comfy benches onboard the boat. As it happens I have no photos of reef itself for these were the days before amateur digital underwater photography. I had a underwater disposable camera but interestingly I’ve lost it since!

Snorkelling is a strange old business and one that I hadn’t attempted before until I got thrown into one of the most biologically diverse regions on earth. I can swim well but breathing while keeping the head submerged was a new concept along with trying to keep water from coming in through my mask and into my air pipe thingy. As I got to grasps with this, others were diving several meters deep and blending in with the surroundings rather effortlessly. As with everything in life for me brute force and ignorance would be my plan of action and as I powered on I was treated to seeing a jellyfish, reef shark and sting ray although I was too slow to see a passing turtle. There were of course many many other little tropical fish but as it happens I simply don’t really care about fish and so not only can I not show you any pictures but I also can’t describe them in any detail. Watch Finding Nemo and you will get the general idea. The reef itself was obviously stupendous and it is simply impossible to grasp how truly huge it is when bobbing up and down in the middle of the sea staring down at just a tiny spec of it. In all it covers over 344,000 square kilometres. As far as ‘firsts’ go, this had been an epic one and my determination to make the most of it equated to four hours snorkelling in the water across two dive sites. As such I passed out exhausted for two hours after returning to the hostel. Who thought floating could be so much hard work!? 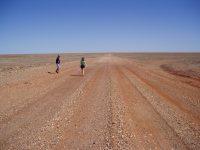 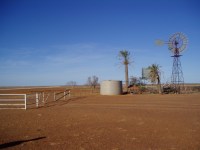 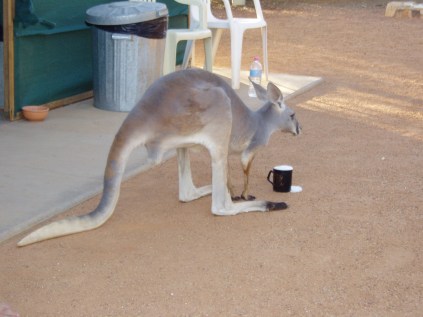 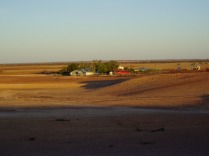 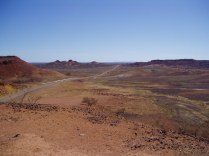 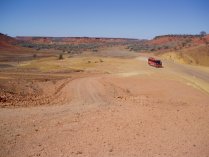 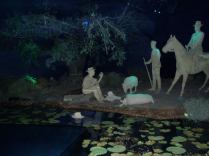 A swagman in a museum 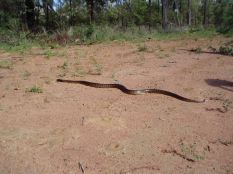 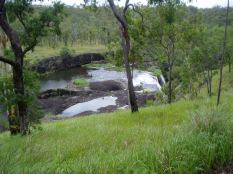