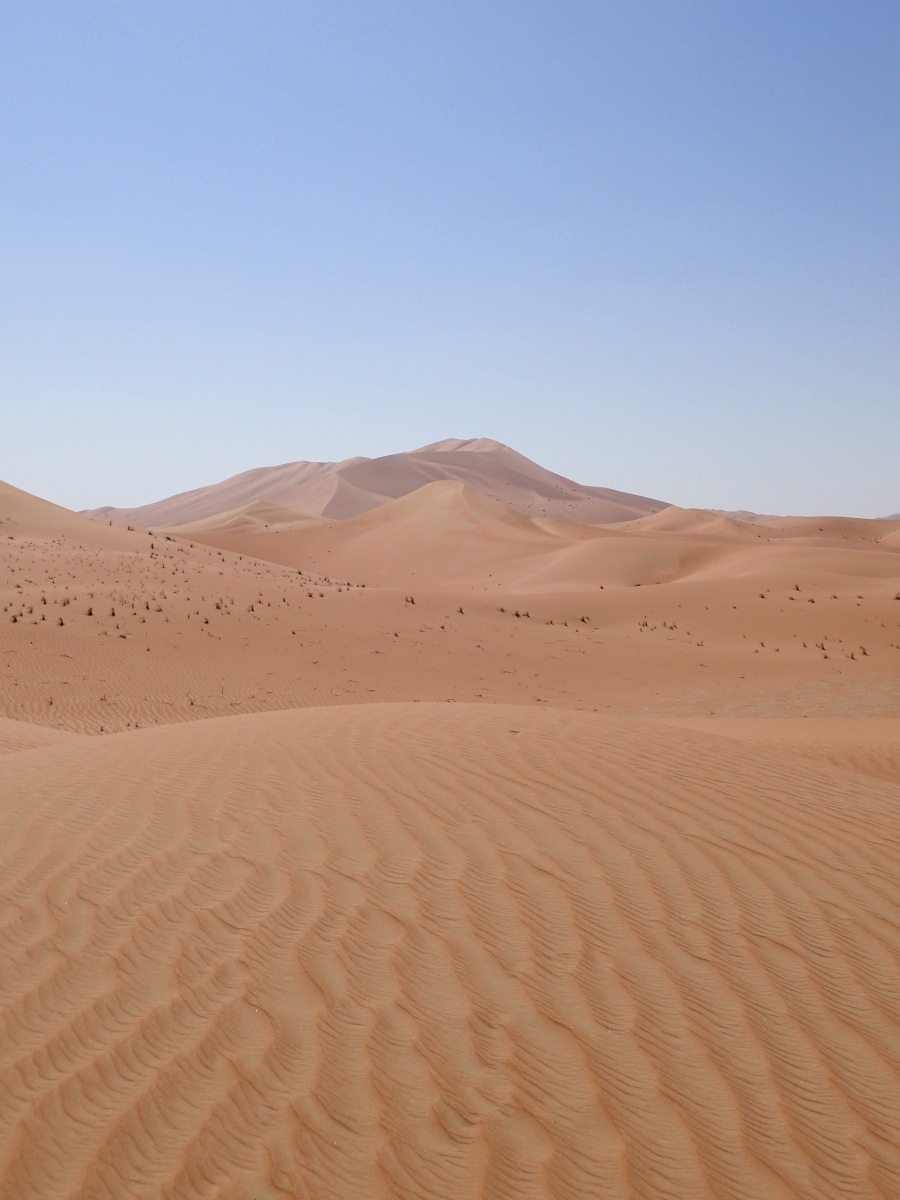 Covering twenty percent of Saudi Arabia there is a desert that lies in the south of the country that also straddles the U.A.E, Oman and Yemen. This desert covers an area of 650,000km2 which apparently makes it a little larger than France. Its an area that receives thirty-five millimetres of rain during the year with summer time temperatures pushing 50oC and sand dunes rising up to 250 meters. This is the Rub’ al Khali and although it has only half the amount of sand as the Sahara desert, the Sahara has an area 9,200,000km2 which makes the Rub’ al Khali by far the sandiest place on earth; something I can very much confirm from the fact I still have sand pouring out of my ears several days after returning. Known as the Empty Quarter in English, the Rub’ al Khali is one of the sparsest places on the planet with few visitors. When I said I wanted to go, Saudis and expats alike asked why. After all, they liked to point out there would be nothing but sand. This is a naive but a common point of view and a stigma deeply entrenched in peoples opinions of travelling in general. I could go to a builders yard to take a picture of sand or head to a beach but the same old shit that we call daily life would still surround me. I wanted to go to the Empty Quarter because I wanted to go somewhere challenging, somewhere remote, somewhere I couldn’t be hassled by my needy phone, somewhere I could look up and see the night sky for what it is. By luck – and partly the fact they couldn’t leave the country due to flight restrictions – I managed to convince three other work colleagues that they too wanted to book onto an expensive tour and poo in a hole for seven days of their precious vacation time.

Writing about this wee adventure was to prove most difficult for the Empty Quarter is most definitely empty with nothing but sand. There was a lot of negative content I wanted to write surrounding some of the less beautiful sights I saw and also the contrast of living for a week in an environment with none of the distractions of home. It is extremely hard to put yourself in such an environment and not feel a huge sense of escapism and relief but I wanted to keep focused on the fun and adventure. It’s also difficult to talk around sensitive issues, particularly regarding the environment when dune bashing in large V8 Land Cruisers! Thus, I will do what I always do and take it day by day, throwing in plenty of tales of the experiences we encountered with little reflections on both the good and bad that we saw.

The tour we joined was 100% Saudi owned and operated, and as such it was no surprise when we got a message telling us that they were running an hour late. When booking the trip we knew very little except for a couple of nights before departure when we were told to pack light and that we needed “3 outfits, jacket or farwah, sun glasses, towel, pillow”. A few weeks before we blindly transferred thousands of riyals to a bank account with no receipt and only the word of some guy on WhatsApp. But, this is Saudi Arabia and no matter what anyones says, they tend to be honest and proud people and also the videos and photos on Instagram looked bloody epic! By 10.30am two fully geared up Land Cruisers had arrived, higher off the ground than the standard model with huge desert tyres, pimped up suspension, built-in one hundred litre drinking water tank, air compressor and, most importantly, electric cool box in the boot. On the way we met up with our support vehicle that carried a one thousand litre full tank, heaps more water and all the cooking and camping gear. All of this for seven days for five passengers and four crew. Within the first few hours of the journey we visited three different gas stations in pursuit of fuel, water and lunch with no sense of any rush or for that matter any plan. There is a simple philosophy in Saudi Arabia. Drive everywhere at one hundred miles per hour in order to allow oneself to take all other activities during the day at a slow and steady pace. There is something about a car that makes a Saudi feel like they have to rush which goes against everything else that they do. Luckily we knew this and we had nowhere else to be and were happy to go with the flow and keep an open mind. With the open road ahead of us we drove 400km towards the U.A.E border to the small town of Al Batha before hanging south east and following the border another 400km towards the town of Shaybah. The roads here are well maintained and empty and the boys happily cruised along at 140-160kph. After one last stop at a gas station in the middle of nowhere we turned off the road and made our way into the night to get our first taste of the sand dunes. Within ten minutes all three cars were stuck! Our car escaped relatively quickly although two mud guards were ripped off in the process with the driver not the slightest bit worried. It was 8pm and after winching out the support car we finally found a suitable place to park up and set up camp. The boys carried nothing in particular to help when getting stuck in sand. The worse case scenario was having to use the electric winch on the front of the support car. There were no sand boards or shovels. Usually when a car got stuck the driver would turn the steering wheel from left to right with the cars wheels turning until it slowly wiggled out of its hole. In situations requiring a bit more work, the driver would get out of the car while it was still in gear and everyone would help clear sand from the wheels. Basically all that was required was a bit of patience and a splash of health and safety ignorance. It worked beautifully.

The first night is never the best. I woke up with a super cosy body thanks to the sleeping bag but my face had been chilled by the wind during the night. There was a tent available but it’s rare to get the opportunity to sleep under the stars with zero risk of getting wet or bitten to death by mosquitos. I also discovered that now I’m no longer in my twenties I do actually need a pillow when camping. However, I was expecting the nights to get super cold but other than a breezy first night, the rest of the week would pass by with very pleasant night time temperatures that enabled me to comfortably wonder off into the desert in the middle of the night in my pants and t-shirt looking for a bush. This is one thing that one has to come to terms with quickly, there are no bathrooms and it became obvious that etiquette demand you wonder off into the dunes to dig a whole and watch the world go by. I chose the middle of the night to do this for maximum privacy because I’m a little strange like that. It proved to be a great success other than the fact it is almost impossible to navigate the sand dunes in the dark because they all sweep into one continuous rolling landscape with specific features difficult to define. All I could do was follow my tracks back to camp which soon became muddled with other peoples tracks and for the first several nights I found myself standing over a sleeping body like a murderous creep until I realised that nest was already occupied and my sleeping bag was in fact the next one over.

The first day was steady, leaving camp around 9am and dissapointingly jumping onto a gravel road. The Empty Quarter holds some of Saudi Arabia’s largest oil reserves and Aramco was trying its best to get to it. As much as we wanted to get into the dunes it had been explained to us that the support car would struggle while carrying so much weight and so the road was used to clock up some mileage enabling us to see more and get deeper into the desert. Once a bit of fuel had been used up we would be full on dune bashing; for now we made a few detours out into the dunes to give us a taster of what was to come. By 11am we had pulled over into some dunes and parked up for a three hour lunch break as was to become pretty standard for the week. We took the opportunity to climb some dunes which were already offering spectacular views and aside from the dusty gravel track, there was no indication of life in any direction we looked. Even on the road we saw less than a handful of vehicles the whole day. Back at the cars, the crew had whipped up a small fire and were brewing tea which was served up alongside cold laban (a sour, creamy, milk drink) and a few snacks. Lunch varied depending on the day and ranged from snacks to a full-on cooked chicken lunch. Then, a siesta! The second part of the day from around 3pm proved to be the very best time to travel. The sun was cooling off as it dropped in the sky and the colours of the desert jumped to life showcasing the greatest range of reds and oranges that you will ever see in nature. With the windows down and the wind in our face, every afternoon was spent rolling up and over and around the dunes with every turn throwing up a completely new and spectacular view. The shadows, the curves of the dunes and their crescents, the chancing colour of the sun, the sheer scale of the views would never fail to wow us every single day. It was only our first full day in the Empty Quarter but we were all in agreement that this was a part of the world that was going to be easy to fall in love with.