We went tiger hunting today in Chitwan NP. On foot walking through the jungle getting attacked by leeches. I suppose it was more of a jungle trek than a tiger hunt due to the lack of tigers. Apparently there are only 125 in this park which is rather big. However, I couldn’t help but wonder what the hell I would have done if we had saw a tiger while walking around the jungle, especially a hungry one! Thinking about it, we saw very little wildlife due to it being wet which means two things. One, there is a lot of bushy stuff in the way and two, the animals don’t need to go to reliable drinking holes to drink and so can remain pretty well hidden.

The tour properly kicked off on Monday, so today is our third day. Landed a good group of people, all of whom started in Kathmandu. There’s eleven of us and then the two dragoman crew. Monday we spent on a sandy beach by a river in the Himalayas which is probably one of the best places I’ve camped to date, ever. Even had a volley ball net. We headed out for an afternoon of rafting. The rapids only ranged from grade 1-3 and so wasn’t too extreme but was still bloody good fun and most certainly the most beautiful river I’ve rafted on. As tradition in my lil world dictates, rafting + beach + camping = beer! Plenty was drunk on Monday night, as in we emptied the bar of all beer.

So Tuesday was a bit tricky in terms of getting up but nothing a kip in the truck didn’t fix. We headed on to Chitwan NP (where we are now) and went on a bit of a 4×4 safari which again was a bit animaless but a good jolly out. The evening was spent at a cultural dance show thing which was a good distraction from he bar!

So all in all it’s going well! We head into Delhi belly territory tomorrow which I assume is when the guts start getting tested! Nepal has been awesome, it’s flying up my top ten list of favourite countries and I will most definitely have to come back for some proper trekking. One of the highlights is still to come, in a few hours time when we head out on safari again but this time by elephant. 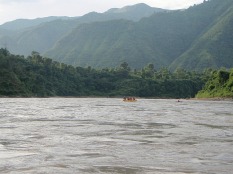 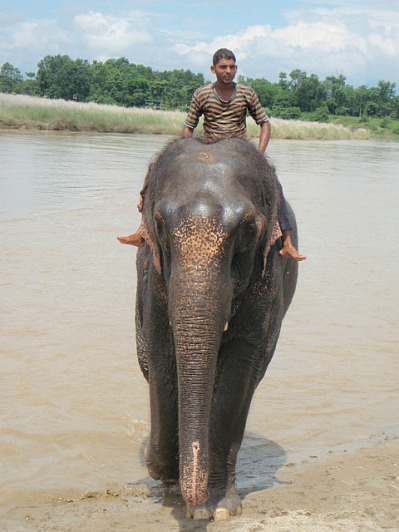 Tent on the right, bar on the left! 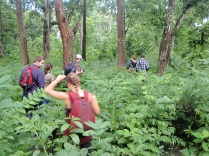