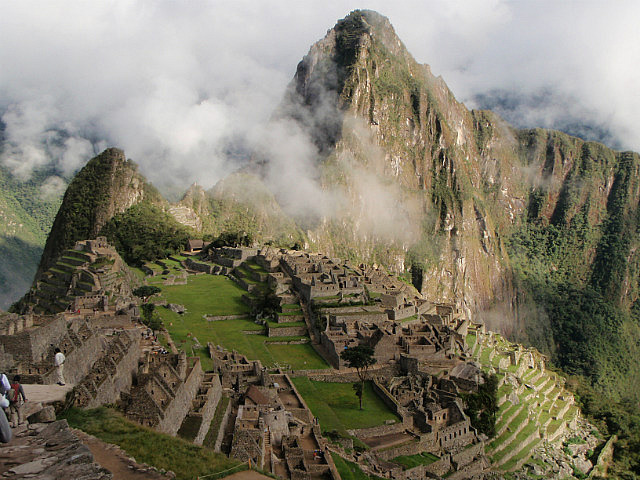 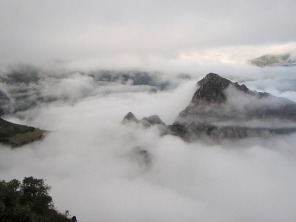 View from the Sun Gate 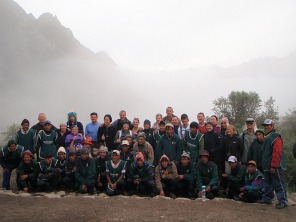 The entire team on day 3 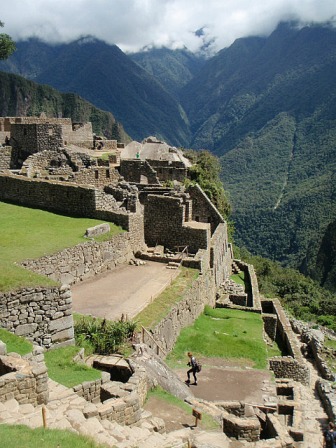 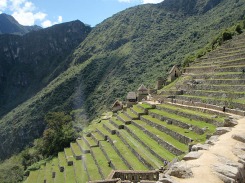 Camping in the clouds 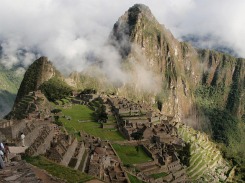 A not so famous view 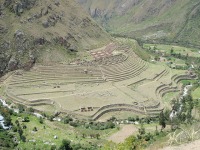 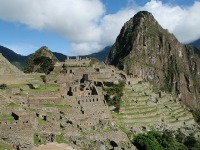 This is a Machu Picchu special which will be known as MP for now and, Huaynapicchu will be known as Huaynapicchu but may be spelt many different times depending on whether I can be bothered to paste the word in every time I need it. I firstly apolagise for the number of potos but it`s hard to pick out the best ones and after four days of hiking through the Andes on one of the most famous hikes in the world it’s hard to not take photos that are at least half decent. However, I feel they will still not be able to show off the scale of the drops, heights and size of the mountains and ruins.

We started the Inca trail on Friday all bright and clean and fit and energetic if not a bit nervous. Eighteen of us took part and to help us along our way was an army of 28 porters, two trainee guides and the lead guide all of whom where fantastic. The army of porters carried up to 7kg each of our personal stuff such as sleeping bags and then all the stuff needed for three nights of camping and three days of trekking such as tents, kitchen and food. Each porter carried up to 30kg on their back and it was up to them to have lunch or evening camp set up on our arrival each time. Which they did without fail. So a typical day for them went like so: wake us up with a cup of tea, cook our breakfast, see us on our way, pack up camp, overtake us on the trail, set up lunch, feed us, see us on our way, pack up lunch, overtake us, set up camp for the night!

Day one was a relatively easy start to our three day 42km trek, spending the night at around 3100m. The second day however was a bitch but, much enjoyable purely because I managed to scale dead womans pass without killing myself. This was only a 9km walk but the majority of it meant walking up to 4200m which I reckon to be over 1km up. In the end, with the help of water, chocolate and cookies several others and I scaled the pass in a respectble time of around 4hrs with a break or two on top of that. Going down the other side of the pass was just as bad with rain setting in and the original Inca Stone steps getting rather slippy which isnt so much fun as the steps were pretty steep. Day three was a long day and a bit damp but most definitely offererd stunning views when the clouds allowed and easier walking plus I think we began to find our stride a little. We finished the day sat on some terraces looking down on our campsite for the night and knowing that Machu Picchu was sat right behind us on the other side of the mountain.

Day four (Monday) was a long day starting at 3am marking the start of the 24hr challenge. First up was a 5 minute walk to the check point where we lined up for over an hour waiting for it to open but happily we were one of the first groups to get on the trail up to the sun gate. After an hour of good hiking we arrived at the sun gate at around 6am and were greeted with the first specatular views of MP. Well view ahoy yes but largely of cloud. We made our way down the mountain towards MP and the cloud gradually lifted to present an awesome day. Essentially Machu Picchu was a city built by the Incas in the 13th or 14th century for important people. After photos and a guided tour a few of us hiked up Huaynapicchu which is the mountain that features at the back of MP in all those classical photos. The hike was 300m straight up and took a good 40 minutes but the views were superb offering a different view of MP below.

By lunch we were down in the tourist town and it was all over. We took the train back for part of the journy which was jolly nice and then a minibus took us back to Cusco. This was a total of 3hrs travelling to get from Cusco to MP which is what the majority of people do compared with our three day hike. We landed back at around 8pm, washed for the first time in four days and headed off out for a night on the beer, getting in no earlier then 3am and thus marking the end of the 24 hour challenge we had set ourselves.

A few points to end with! I apolagise for the lack of history and facts but I was a bit too knackered to remember plus it would make this way too long. Secondly I dont think the photos are always in order, not sure why. Thirdly the bad spelling and grammar has a lot to do with the keyboard this time. And finally a big up to Kerry and Wilko, our newly engaged couple. Wilko thought it a good idea to pop the question at Machu Picchu over looking the ruins with ring and all, much to the horror of all the other guys in relationships on the truck!