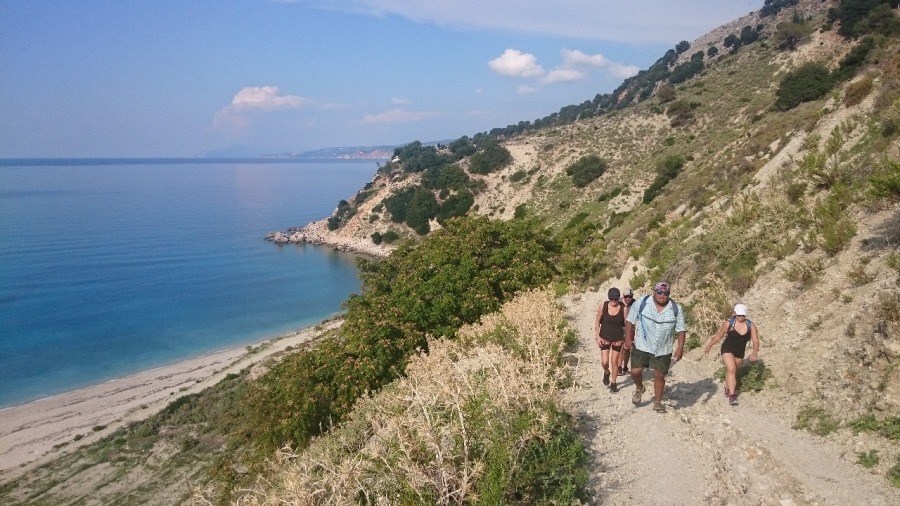 I couldn’t wait to get off the EasyJet flight to Zakynthos. It was full of the tourists that you often see on reality TV programmes and I had been travelling for about 18 hours having had to fly from Saudi, over Greece, to London, to fly back to Greece. Several people had asked why I was going to Greece and whether I had lost my travelling mojo. Basically during my last job I decided I would take one 16 day tour to somewhere on the other side of the world and, I would take a shorter 10 day trip somewhere in Europe. I would therefore be able to make a lame attempt to keep up the travelling. A change of jobs since then now means I have three times more holiday to play with but the Greek tour sounded fun and besides, I’ve never been. It is day three of the tour and in a word, EPIC! Actually epic is a bit too strong relative to other places but, Greece is nonetheless fantastic and the tour is, well fantastic.

Landing on a knackered old runway with a little old concrete building, one team of ground crew and only one other plane parked up, you know you have landed somewhere good. Passport control was even better with the entire plane being processed in 15 minutes. By one man! The guy looked like he had just returned from volunteering at the Olympics, wearing a bright yellow shirt and welcoming smile. No guns, no badges and very little care about who was walking past. This kind of attitude sums up Zakynthos and I would guess most of Greece! It was about 8pm when I got to the hotel partly due to the fact that someone had forgotten to pack the food on the plane and so we were stuck at the runway for an extra forty minutes. Anyway I’m not bitter! After a quick shower it was time to go out with the group for our first meal. We are made up of Scots, English, Italians, Americans, Canadians, Germans, Dutch and, Australian. Therefore a very diverse group yet, everyone is up for a beer and a laugh. The Americans deserve a special mention! One from North Carolina, one from Texas and one from Alabama! Americans from the southern states, on tour! This is all new to me, something has changed in the world. I hasten to say they are great guys and are the last to go to bed at night and the first to get a beer with you at lunch. But then, most of the group are like that. It’s good the group are like this because the activities have been far more active than most of us anticipated! Therefore a positive attitude and good sense of humour has been essential.

The tour mentioned a fair bit of cycling, walking and, kayaking. In our first three days we have hiked 5-10km every day and biked 25-35km daily on and, off-road. Normally several hours a day are spent on a bus of some kind when on tour but not here, we have been on a bus once for thirty minutes! The reason why this is possible is because the Greek islands are so quiet and peaceful. You can sit in a café over looking the ocean and hear nothing but a barking dog in the distance. It’s bliss. We can go hiking and biking across beautiful scenery with amazing views and see absolutely no one. This is my kind of travelling. It’s strange though because it’s not an unexplored area, it’s just an area no one bothers to go to! To cap it all off we went on a boat cruise to look at the caves along the coast and the skipper asked if we would like to stop and jump off some cliffs into the crystal blue sea. I was in heaven! Talking of heaven! A greek salad combines everything that is awesome in the salading world. Chunks of tomatoes, red onion, olives, peppers, cucumber, a massive lump of feta cheese and lots of olive oil with a few herbs. The olive oil alone is awesome!

It is completely understandable why Greece is poor! I don’t know what they do. They are living the life they have lived for decades, relying on any tourism that comes through and then olives. There isn’t anything grand, no big resorts, no big agriculture, no big industry. A reason why it’s a great place and don’t get me wrong I’m sure Athens is a different story. In fact the more I thought about it the more I realised that if a tourist rocked up at Evershot in Dorset, they too would probably have the same opinion, that nothing has changed for decades!

Here, the shower heads are rarely attached to the wall. When they are the water is cold and then of course, being Greece, you have to put your **** wiping material in the bin next to the toilet! I don’t think I’ve been anywhere in the world that requires putting toilet paper in a bin!! I’m sure this is a joke played on tourists and nothing more! Then there was the cow walking down the road. A beautiful winding coastal road we were biking along and then a cow, with big horns and big testicles running straight towards us. Where he came from, no one knows and, no one seemed concerned. Oh and another strange but great quirk, Wi-Fi is not available everywhere! Which is awesome and most definitely encourages more alcohol abuse within the group!

Peace be with you Nan x