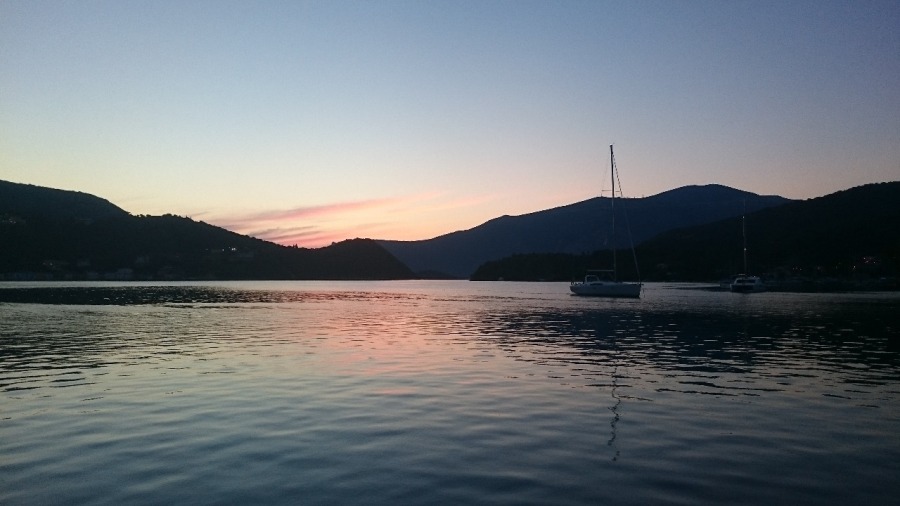 I like to get political in the countries I visit but, Greece is politically boring or, at least the Ionian islands are! A bunch of islands wholly dependant on olives, grapes and, tourism. The residents must have an average age of 117 years. The reason we can do a lot of cycling here is because no one is in a rush and so you can ride your bike merrily in the knowledge that no one is travelling fast enough to injure you. The biggest threat is the possibility of cycling into a cow. Even the tourism is half arsed! I mean that in the politest of contexts and I love it. Everywhere we have been there is no major advertising, no streets littered with shops offering day tours, no one pestering you to come to their bar for cheap cocktails. It is all peace and quiet and go at your own pace. The only thing that is in your face is the breath taking scenery. So, it’s end of season but, I get the impression that high season doesn’t exactly get rowdy. An impression supported by the tour leader.

Every time I go to South East Asia I am trying to explain why it irritates me. It is because it is in your face, sell, sell, sell. Motorbikes and noise everywhere, no quiet roads, no peace. You will find moments of awesome tranquillity but it is in the minority. Then there is India, a country that is in your face but I feel like it can’t help itself, it is just innocently mental which, gives it a fantastic vibe. The Greek islands however, absolutely everywhere is peaceful. Every turn and every town offers picture perfect views, amazing food, and pure peace. The only problem with great views on a cycling and hiking trip is that there will inevitably be hills. We have gone up some crazy as hills and my stubbornness refuses to allow me to get off the bike and push it up hill! Brute force and ignorance has been the fuel of choice. But of course what goes up must come down and some of the down hill runs have been great fun. Then its a case of trying not to die by planting your head into a tree with a bicycle seat stuck up your arse.

We spent a couple of nights in a small town called Vathy. In your mind imagine a James Bond styley town. A small natural harbour with crystal clear waters, villas going up the side of the hills, winding roads and yachts in the harbour. It was stunning and charming without an ounce of arrogance. We had one full day here and the luxury of having absolutely nothing to do for the morning which was very much welcome. I used the time very wisely, in my opinion, opting to go back to bed for a nap. Part of me feels bad, part of me doesn’t. To be fair, a rest was needed and the only other option was to lie next to a pool with a beer which, even for me was a bit too early. Looking back I was happy I had a rest because the afternoon of chilled out sea kayaking turned into quite the adventure. By the end of the day it had claimed two victims. One of the girls had to go back in the morning session because she got sea sick and, another had to go back during the afternoon session due to food poisoning! The rest of us on the afternoon session had a wonderful time in the sun on the water until we turned around a headland and hit the wind and waves which gradually got worse as we slowly made our way back to the harbour. We were supposed to stop for a snack and a rest on the beach but ended up having to keep paddling for fear of not getting back by nightfall! The guide asked if we wanted to get out earlier at a bay and catch a taxi. This was an option that (thankfully) the entire group ruled out no matter how tired we were. A tad under five hours after setting off we finally made it back! I bloody loved it!

Going back to the Greek half arsedness, this has even influenced our evening social activities. We go out for dinner around 8.30pm. Usually the days activities don’t finish till around 6pm and we will then spend some time tending to blisters, aching legs, de-sweating and napping. After dinner we will head to a bar and enjoy a few beers which usually takes us to 1-2am. Yet, the bars are chilled out, which means we are chilled out which, means we casually slurp on beers and cocktails as opposed to smashing them down. This equates to a warm cosy blanket of drunkenness as opposed to a cloak of mental horror. The benefit is also that we can handle exercise the following day. However, there was an incident the other evening when one of the duchies failed to control their alcohol (a total of half a bottle of wine over dinner!). She went from a state of polite dinner table etiquette, to a state of woo woo party girl, to a state of sleepiness, to a state of chundering, all within 30 minutes. I kid you not. Unfortunately for me, my foot was resting happily on the harbour wall which happened to be in the projectile area when the last state of drunkenness was reached! Unfortunately though, as previously mentioned, it appears it was a case of food poisoning that lead to the eventual chunderation!

Finally, this is my first trip away with my newly purchased travel laptop. The con, having to lug the thing around with me. The pro, I can sit on my balcony, over looking a beautiful harbour while I type instead of trudging around town looking for an extinct internet café. Then again, a coffee would go down quite nicely right now!