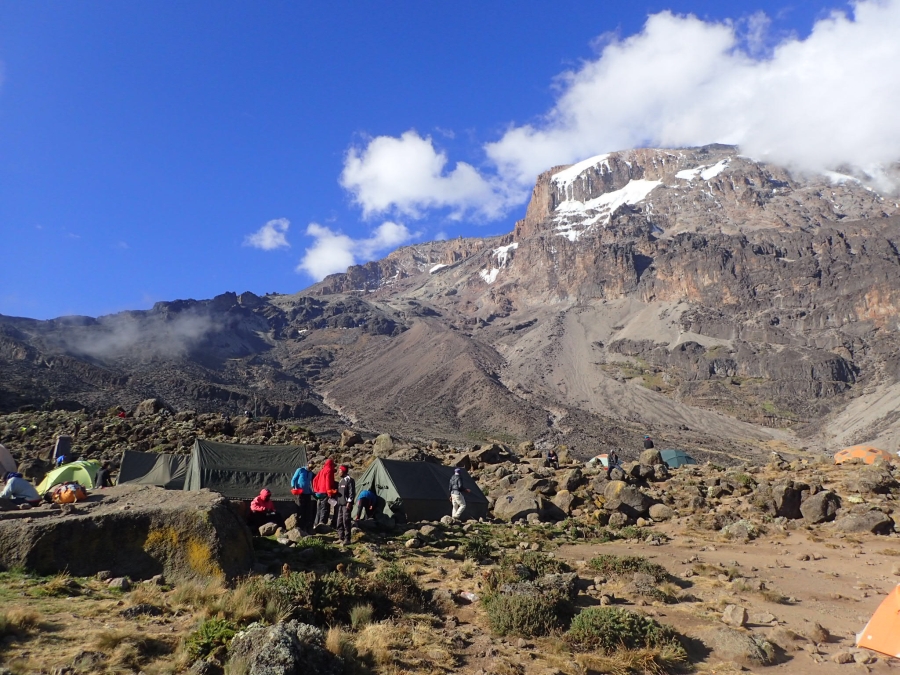 “From the Western world, where a premium is set on efficiency and progress, it was delightful to come into this Arcadian land of easy simplicity, wooded hills, sunshine, and cheroots. No one is ever in a hurry in Burma, and though, as we sometimes found, this can be most aggravating, one is forced at the same time to acknowledge that it is probably doing one’s soul no end of good.”

This is a quote taken from Tim Slessor’s book, First Overland. It was a beautiful coincidence that I was reading it while knocking back a Tusker in a peaceful Tanzanian hotel as ‘Burma’ could easily be replaced with ‘Sub Saharan Africa’. Pole-Pole (pronounced Poley Poley) is Swahili for ‘take it slow’ and is the key international word used on Kilimanjaro. You can ask any question you like such as, ‘can I have a cup of tea?’, and it will likely be met with ‘pole-pole’. However, it is this very word that will get one up the mountain and the sooner you take it seriously the better. After a wait of several hours at Machame gate due to the registering of everyone and, the organisation of our team of porters we finally began trekking. Although, it was quite possibly the slowest start to anything that has ever happened! It was incredibly difficult for me and several of the other guys to walk as slow as the pace that had been set by our guide who was adamant that ‘pole-pole’ was the only way. We had eleven kilometres to hike before reaching our camp for the night at 2600m and no matter how unnatural it felt for me to walk so slow, I did as I was told and stayed in line. As is turned out, this would be the fastest part of the whole ascent, covering the distance in four hours and arriving at camp by 5pm.

The camp was in a beautiful spot, away from the crowds and surrounded by bushes and trees. It even came with it’s own complimentary pair of toilets. There is one thing a person has to get over when going off trekking and that is the toilets. Literally a tiled floor with a hole in the middle, no running water, no lights, sometimes no lock. All that is required is for you to crouch and go for your life. On this occasion someone had got overly excited and missed the hole which makes the event all that more challenging for the next person! Toilets aside, the camping was almost luxury. We arrived to find our tents had been set up with the camp mattresses rolled out and our bags placed inside. Within ten minutes of arriving, warm water was poured into individual bowls so we could have a wash. Then it was the small matter of sitting down in the mess tent and having a hot drink (ginger tea was a fave) and some popcorn, biscuits or, peanuts. The evening meeting with the guides shortly followed and then it was dinner time where strangely on this night we were treated to fish and chips. We then finished the evening with more hot drinks! Incidentally, every evening the guides would take a reading of our heartbeat and blood O2 level in order to monitor any changes as we ascended the mountain. We were constantly forced to eat food and drink plenty, something that we were only too happy to oblige with, especially as what was on offer wasn’t half bad.

The mornings followed a similar routine also, wake up to a man delivering a hot drink and a warm bowl of water, sort your life out, eat lots of breakfast and start trekking. The following day saw us cover just 5km, arriving at camp for lunch. The afternoon was spent walking around some lava caves and being welcomed to the mountain by our support team. The team consisted of one head guide, five assistant guides, two trainee guides, one chef and one assistant chef plus, thirty-three porters who ferried the entire camp from one site to the next. This team was for a total of twelve trekkers/clients/tourists/passengers/muzungos, whatever it we are called. Following a good fifteen minutes of African styley song and dance with the mountain framed behind, we were introduced to everyone. The entire team were singing, clapping and, dancing, all with smiles on their faces. I have seen this many times in Africa and is a part of their culture I love, so long as I don’t have to join in which, usually you do! But, this is the thing, you would never get a bunch of Westerners happily breaking into song and dance. Imagine a bunch of none drunk French guys happily singing cultural songs to their clients with Mount Blanc in the background.

Day three took us up to 4600m albeit, only for lunch. The purpose of this was to begin acclimatising us to the altitude and by doing so we had left the shelter of the forest and bushland and well and truly arrived at the rocky ‘alpine desert scape’. It was cold. It was hot. It was cold. It was hot. There was no in-between! When the sun was out which, to be fair was the majority of the time, it was lush. However, when the sun hid behind the clouds the layers came piling on. Barranco camp was our final destination for the day, sat at 3900m, surrounded by walls on three sides with a view overlooking the clouds ahead and, the summit looming over us. When the sun went down it was bloody freezing yet the glow of the Milky Way went a long way to compensate for the cold, as it did every night. Later in the evening the moon would rise and although it was at the expense of a heap of stars it did mean that you didn’t need a torch to get around.

There were a few issues at Barranco camp! Firstly we picked up our most serious injury of the trek here. Admittedly the day had been a decent one with ten kilometres covered, an ascent to 4600m followed by a decent to 3900m but, it was the final five meters that completely buggered one of the guys. Whether she sped up at the sight of seeing her tent I don’t know, but at the end of the days trek Debbie fell over literally five meters from her tent and smashed her knee against a substantially sized rock which, in return provided a colossal bruise that resembled the same colour as the Ribena berries on tv. Then there was the small matter that plenty of us felt bloody awful, me included! Upon arrival I was greeted with a headache and the odd feeling of throwing up from time to time. We were warned it would likely happen due to the changes in altitude during the day. Luckily it passed later in the evening without the aid of painkillers but, with the summit attempt the next night and another two kilometres of up up up to go, the nerves were once again in full flow. 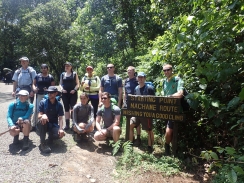 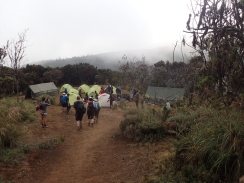 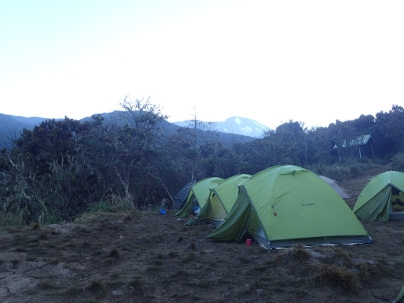 A row of tents 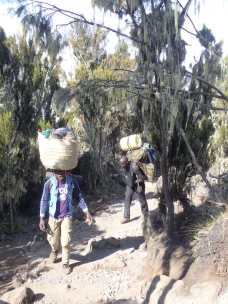 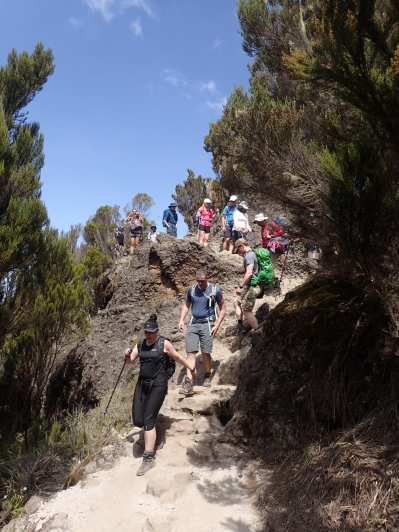 A bit of downhill 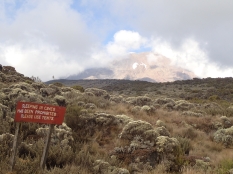 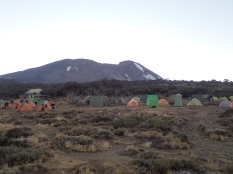 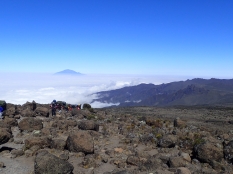 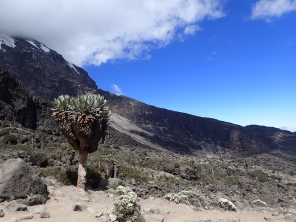 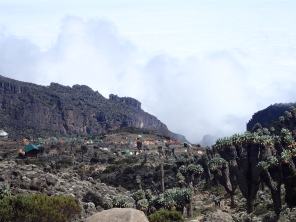 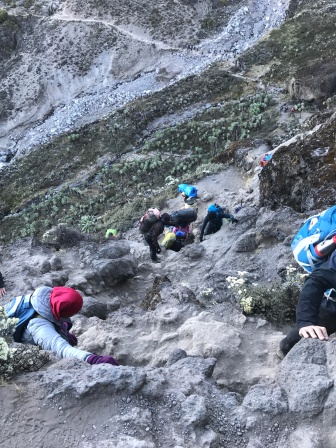