The next thirty hours would involve a lot of going up, a lot of panting, a lot of going down  and, not a lot of sleep! Day four began a tad earlier than usual so that we could beat the traffic that would inevitably descend on the Barancco wall. Literally what it says on the tin, the Barancco wall is approximately a three hundred meter high wall of rock that we would have to navigate to the top. It was in fact one of the highlights of the trek, offering a narrow rocky path, with sections of easy but fun rock climbing and, spectacular views of the valley below. Once at the top we were treated to further stunning views of the clouds below us and of Kilimanjaro’s summit above us. This became the order of the day, view, after view, after, view and, it never got boring. Lunch was at a campsite which almost felt like you were actually dining on one of the surrounding clouds. Our entourage, on a daily basis, would pack up camp from the night before, haul their asses ahead of us (taking into account we left before them), set up the mess tent and kitchen in readiness for our lunch, serve lunch, pack up, and then run ahead to set up camp for the evening. Although lunch was early today, it was for good reason and nonetheless we ate as much chicken, roast potatoes and, salad as they pushed in front of us.

The weather turned after lunch with cloud, wind and, the odd flake of snow but then, we had finally reached Barafu Camp (Base camp), sat at 4600m. That’s fifteen thousand feet. I’ve jumped out of several planes at the same height or, less! We would be spending the night (well, a bit of it) at that altitude before hauling ourselves up another five thousand feet towards the great pearly gates. With the evening briefing and dinner out of the way we all headed off to bed around 7.30pm. It was baltic, it was early, the camp was aloud with porters, I was feeling fantastic, excited and, nervous. Sleep? Very little! At 10.50pm there was a knock on the side of the tent which was our queue to get kitted up and ready to go. Of course no trek was allowed to begin until we had our hot drinks and biscuits and with that taken care of, we were raring to go by 11.30pm, half an hour ahead of schedule. Apparently this was a rare and thankful habit we had. The entire group were always up before our wakeup call and always ready to go. Apparently some people need dragging out of their tents in the morning. Some in fact don’t even bother getting out of bed at 11pm for the trek to the summit. With only a reported 65% success rate of reaching the summit, statistically four of us would fail to reach the top and, the chances of a 100% success rate for an entire group were rare, not that anyone had any doubts in their mind at the time.

It was scheduled to take six hours to hike five kilometres to the summit, getting there in time for sun rise. That’s 833m/hr and is exactly the pace we went. Trust me when I say, it felt a whole lot slower! The first two hours weren’t too bad. The guides were supposed to stop us for a short break every hour but they pushed past seventy-five minutes for the first few stints. The problem was when we stopped, everyone got cold very quickly, something you didn’t actually notice until you got moving once again. Cold people was the last thing the guides wanted. This is where pole-pole came into it’s own. As we broke past 5,000m every step I took was hard work with one foot barely moving in front of the other and I was constantly out of breath. Imagine running as fast as you can for five minutes or, to the point when you are completely knackered. Got it? Now keep running for another three hours with that knackered feeling. Luckily the stops became a little more frequent, around forty-five minutes but, they offered only a tiny rest bite to regain your breath before loosing it less than five minutes back into the hike. I wasn’t the only one. Three of the guys had fell well behind and most of the lads, well seasoned in hiking and general fitness were struggling, with several handing over their day packs to the guides to try and ease the burden. I should have done the same which may have made my night a tad easier but I was too stubborn! I cannot describe to you how much of a mental challenge it was. All I wanted to do was give up and go home yet, I kept telling myself to keep putting one foot in front of the other, pole-pole, until I collapsed. It was the strangest feeling, my legs felt fine but my lungs and brain were running on absolute empty. The sight of the person’s feet in front of me became mundane. If I looked up I was tormented how far the glaciers on the summit appeared to be, outlined by the glare of the moon. If I looked below I could see a steady stream of headlamps slowly climbing the trail and, the outline of another peak which at one point had been above us but as we busted past 5,000m it began to look quite small.

Finally, we reached Stella point at 5,756m. This was the final stop and marked the end of a five hour gruelling climb. The final one kilometre of walking and 139m of heading up, we were promised, would be relatively easy, taking no longer than forty-five minutes. Armed with this knowledge and beginning to see an orange glow on the horizon we all rallied and pole-pole, hauled ourselves to the top. And when we reached the summit, Uhuru peak? We took some photos and headed back down! What can one say without any cliches? You stand on the top of the worlds largest freestanding mountain aka a dormant volcano, the highest peak in Africa, below you is a colossal crater lined with glaciers, further below is a thick fluffy blanket of white cloud, to the East this cloud is lined with a fierce orange as the sun rises, to the West is the shadow of the mountain cast on the clouds, sat on a rock is an Irishman who looks absolutely spent, in fact we all look spent, around me people are trying to take photos with frozen fingers, it’s baltic at around -11oC (the water had frozen solid in my water bottle). Basically, you are trying to enjoy one of the most stunning things you will ever witness while at the same time fighting the urge to get the hell out of there for oxygen, a warm cuppa tea and a bacon butty!

As we descended back to Stella point we passed the three guys that had fell behind, all three had a look of despair mixed with sheer determination in their eyes, the same look we no doubt had at the same point. Drilling home the team spirit message, we promptly decided to continue down the mountain and let them continue up with the aid of the guides. We were heading to warmth and the desire to start walking uphill again could not be mustered. The path back down to camp was predominately gravel on a very steep slope. Several of us found running down it and digging our feet in from time to time to slow us down was the most fun way to go about our descent. It was like skiing but, without the snow or the skis. It was also incredibly tiring as the effect of altitude was still well and truly with us. In under two hours we had returned to camp around 8.30am. We immediately went to sleep for a few hours before being woken for lunch. All twelve of us had returned, all twelve of us had summited, all twelve of us were exhausted, all twelve of us were buzzing, all twelve of us had a slightly different story to tell. We made the group decision to walk for longer that afternoon and descend to 3100m where we would camp for the night. The following day would be our last on the mountain, signing out at the gate with a beer, a shot of vodka and, a certificate of course!

I have been incredibly lucky to travel with an abundance of awesome people over the past ten years. The group I joined to climb Kilimanjaro were sensational, everyone bonded, laughed and, fought their way to the top. Our final night on the beer at the hotel is testament to that, as is the many, many, many group photos we took along the way! 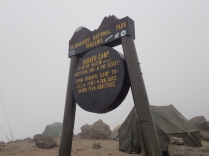 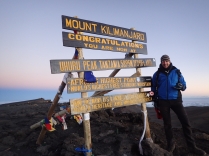 Sunrise at the top

Glacier at the top plus shadow 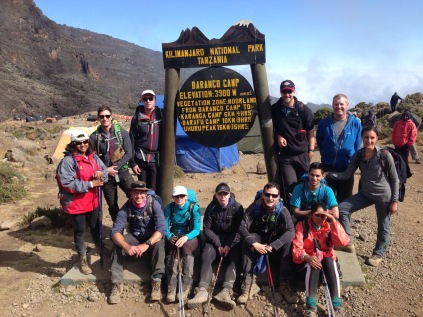 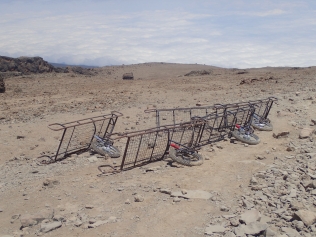 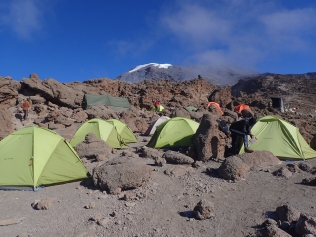 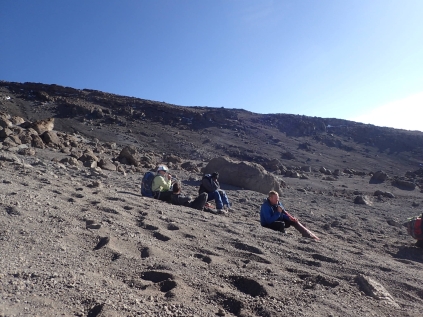