When surrounded by snow several feet deep there is very little to be afraid of in terms of personal injury. One may think everywhere is icy and one is liable to slip over but, there is very little ice as it is so cold that the snow is soft and powdery. There is also the fact that one is dressed in a minimum of six layers of warm clothing which not only provides insulation but also pretty much eliminates bruising from any falls. However, if you were to fall, you would likely fall into a heap of snow that offered the same cushioning sensation as…. well, a pile of cushions. All this therefore makes a whole range of activities far more appealing than what they should probably be. Like sliding around the area on two sticks for instance. There is a price to pay mind. That being, everything is bloody hard work! Even with clown size snow shoes, walking in deep snow is hard work. Skiing down hill burns the legs. Riding a bike in snow is like constantly going up hill. Skiing on flat ground I cannot explain, it’s neither as difficult as expected yet definitely harder than walking down the pavement. Luckily though, my mediocre attempt to increase my fitness over the past two years helped me through an exciting week in the snow.

I had never cross country skied before as I am a man of logic. Quite simply skis don’t work so well on level ground and even less so going up hill. I don’t recall anything that naturally slides up hill thus sliding down hill must be the easiest option. It is. Yet, I must confess I enjoyed cross country skiing so much that I will do it again when the chance arises. Few of us in the group had attempted it before and we spent a good half hour on a frozen lake kind walking and sliding at the same time. As with everything, technique was the key to success and, as with everything I have very little patience when it comes to learning. I get frustrated and I revert to brute force and ignorance. Although, as I get older I am learning (ironically) that life is much easier if I take a moment to relax and enjoy getting something right. In this case, elegantly and effortlessly gliding across lakes and through woods. I decided speed was the key which, to be fair our guide had already told us the fact. Once we got into a good momentum it was much easier to slide across the snow and more difficult to fall over. I wouldn’t have wanted to go up many hills but even as we progressed away from the lake and into the woods, gradual inclines became less scary. All in all it turned out to be a good morning.

After yet another delicious lunch of stew and bread a bunch of us had signed up to go fat biking. There were two main reasons for this. The first was that we would be fat biking in the Arctic circle which, in itself sounds both ridiculous and cool. The second reason is that I have never been fat biking before and I was intrigued. I knew what it involved, I just wanted to see if it was as pointless as it sounds. A fat bike is a normal pedal bike mounted on big tyres which makes it possible to ride in conditions such as soft sand and snow. It’s basically the monster truck of bicycles aka pointless. Also, I don’t know if this is a Finish thing but, the chains on these bikes were the opposite of fat, they were half the size of normal chains which was odd considering the amount of power that was required to begin pedalling. This may just be me trying to find an excuse as I snapped a chain within the first few hundred metres of setting off. As the snow fell, so did the sun and, so did the numbers in our group. The scenery as ever was epic but the pedalling was hard work, particularly so in areas where the snow was soft. By the time we reached the end of the track our group had reduced to three from a total of eight and headlamps were required to navigate our way back. I feel I have given fat bikes a bit of a hard time but I actually really enjoyed it. On the way back I didn’t stop, and once again getting into the swing of things made everything so much easier. I think we only totalled around 10km in a few hours but it was more than enough to work up a river of sweat in temperatures of -15oC.

To end the day, after dinner around 9pm we kitted up and headed back out into the woods for a nighttime wonder. It’s always a bit of a ball ache having to get geared up back into layers and layers of winter clothing but, as with anything that requires a bit of effort it was well worth it. You may be thinking that after a day in the snow, everything is damp but, the snow isn’t wet and, the floors are heated in the chalets. Therefore it is basically compulsory to throw all your clothes on the floor and when you come to wear them again, they are nice and toasty. With toasty clothes and snow shoes strapped on, we headed into the woods under torch light, trekking through snow that was two feet deep. After a wee while our guide grouped us into a circle and told us to switch off all our lights. In no time at all it became pretty easy to see what not to bump into. We were then told to turn around and walk off into the woods, away from everyone else, lights off and to not make a noise for several moments. I would say the silence was erie but it wasn’t. In the distance we could hear the rapids on the river, other than that it was perfectly silent. On a separate occasion earlier in the week while in the woods, we were told to walk off and hug a tree while being quiet. It is supposed to re-energise someone, especially if out in the woods alone. Strangely it does appear to have that effect with the peace and tranquility providing something we seldom get to experience these days. Going back to the nighttime scenario, after around five minutes we gathered ourselves and made our way back to the chalets with no lights and no trips or falls.

As if the week couldn’t get any better, it did. We all headed off to the local village, Ruka, which is basically a mini ski resort. I haven’t skied for years because travelling keeps getting in the way but today was the perfect opportunity to get back on the slopes and, with a couple of the other guys who just so happened to be of similar skill. As it turns out I haven’t lost the ability to ski and I still have the wonderful technique of going as fast as I can, getting extremely scared on the odd occasion when I feel myself starting to loose control, regain control, just, get to the bottom, and then jump back on the chair lift full of adrenaline ready to go again. Skiing is awesome. Unfortunately we only managed to get three hours in but the weather was a tad blowy and we had pizza on the brain. Unfortunately I couldn’t wash the adrenaline down with a few beers at lunch because of the next activity but, we did find great pizza! Mine was called a Rudolph pizza. It only seemed right to try a bit of reindeer when in town.

The afternoon was spent on skidoos. I was very excited about this but after the dog sledging experience I felt skidoos were quite unnecessary and probably don’t help with the whole global warming thing. Anyhow I can’t comment on such things until I have tried it for myself. Firstly we were breathalysed, then we were robbed, then we were provided with the warmest overalls I have ever worn (it was like wearing a duvet) and, a helmet. A wee practice then followed to prove we were capable and then off we went for a bit more of the Finish countryside. Snow covered trees and frozen lakes. The sun had gone down and most of the trip was in darkness, as in the snowy darkness that arises in snowy places, as discussed earlier. There were a few older guys with us and to be fair they went for it but I still made the decision to stay at the back. I then had time to stop and take some photos which then meant I had to catch up with the rest of the group. At one point I almost hit 70km/hr going across a frozen lake, on something that uses skis for steering! I loved every second of the skidoo trip but they are not as good as quad bikes. Going at speed on a motorbike on skis gets quite daunting as the skidoo will compromise with the operator over where she wants to go. It won’t go exactly where you want but it will still get you to where you want to be, vaguely. I just takes a bit of getting used to like everything else that is new but one can go much faster on a quad bike, much sooner before feeling like you are about to become another tourist quad bike statistic. On our return, while waiting for our bus we asked the hire shop guy what he did during the summer. His reply…. ‘Go fishing, all day, every day, all summer’. 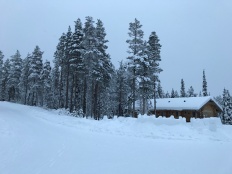 Learning to ski on a level 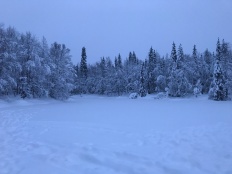 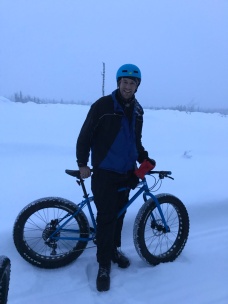 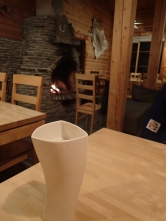 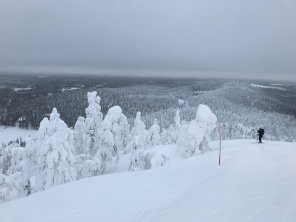 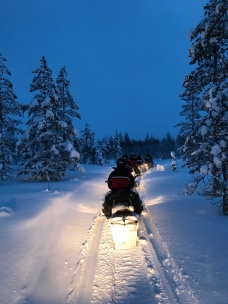