We had a whole day dedicated to quinzee building. I wasn’t so sure about this as it would involve working together with a group of people I barely know to construct something that seemed rather pointless. As it turned out, I was wrong and the day turned out to be surprisingly good fun. A quinzee is a bit like an igloo only completely different. As far as I am aware, an igloo is made out of blocks of ice which, in my mind basically forms a sturdy brick building so long as the temperature remains below zero. A quinzee is made from a heap of snow which is hollowed out into an igloo shape but, this feels to me a lot less structurally sound. Our guide reassured us that so long as we built them to standard, our quinzees would remain standing until the spring and so we took his word for it and started shovelling.

Step 1. Create a huge pile of snow approximately six feet high once compacted. There is plenty of snow covering the frozen lake we are building our quinzee on. Compaction is achieved by getting people to walk/lie/jump on and, occasionally beat the the pile of snow with a shovel.

Step 2. Take a bucket of sticks of equal lengths and stick them into your heap of snow, making sure they are pointing towards the centre of the heap.

Step 4. Start hollowing out the centre of the snow dome using, mini shovels, big shovels, and hands. Once you hit a stick or begin to see light, stop digging. Once the interior is to ones satisfaction, build a layer of snow on the bottom so that the floor of the quinzee is several inches above the floor of the entrance. This will help conserve heat.

There was the option to sleep in our quinzee with super warm sleeping bags being supplied to help us sleep easily in -30oC, on a frozen lake in a hut made entirely of snow. Usually I would choose to do such a thing but, these things involve beer and I was short on drinking buddies that would chose to sleep outdoors in snow. Several people did attempt to sleep outside with some lasting the night and some calling it quits half way through.

Our penultimate day was free for us to do as we like. There was an option to go dog sledging for the day which I had originally budgeted to do but I had convinced myself that a few hours would be enough after the previous outing. I was wrong again. I should have gone again for the full day. The people that went and did it came back annoyingly happy. On the upside, it has convinced me to go on a five day dog sledging trip in Greenland whenever the budget next allows. Camping on the ice in Greenland must surely offer good chances of seeing the Northern Lights as well!?! On this occasion I chose to do a bit of snow shoeing instead. I headed out on a circuit trail that would take around four hours to complete. A lot of the group had decided on doing the same thing and everyone headed off in dribs and drabs. I hung around and then headed out on my own as I fancied a bit of time on my own and to be able to enjoy the silence that the forest had to offer. As it turned out I ended up passing everyone over the coming hours and completed the walk in three hours much to our hosts surprise. I don’t really do slow walking. When I walked I got hot and sweaty. When I stopped, the sweat began to freeze which in turn began to freeze me. Therefore, logically it was best to continue on and get on with the walk. After all, a warm lunch, cold beer and, hot fire would be waiting for me. It was a stunning walk, following a river for much of the time. This river was completely frozen over in some places with other places open to rapids. The trail went down to the river at times and on other occasion it would rise a few hundred feet to offer spectacular views. The landscape never got boring. In theory snow and trees should get boring after a while. But, the snow and frost on the trees changed daily according to temperature and snow fall and because the day was basically all sunrise or all sunset , the colours constantly changed all day long. It was truly beautiful.

As I had made such good time I managed to get a beer in before my room mate arrived and treated me to a second beer. After such a jolly morning I retired back to my room to read and promptly fell asleep for almost two hours. I won’t be judged for having a cheeky nap when on holiday! It was then time that get kitted up and head back out to the forrest as this evening we would be dining outside. Again, this appeared to be something necessary and I couldn’t really be bothered to sit out in the cold around a campfire eating dodgy sausages. In fact some people chose not to go, simply because of the cold. What a mistake that turned out to be! Out of the darkness appeared an area lit up by two roaring campfires which had covered seating areas either side and a little kitchen area where our guides had prepared mash potato and minced elk. It was awesome. For desert we made pancakes on the fire. It was a truly unique experience which is right up my street. We stayed out for a couple of hours before heading back to the warmth but I would highly recommend a campfire out in the freezing snow at some point in your life, especially with creamy mash potato! A burning fire in the snow at night appears to make everything around it glow, giving the illusion of a warm environment even though the snow right next to fire refuses to melt.

The final day offered one last activity to get involved with before catching the flight back to London. Abseiling. Lovely jubilee. I hadn’t been abseiling for years, back in the days when I was scared of everything. These days I love climbing up and, jumping off stuff. On this occasion I would be abseiling down a thirty foot cliff next to a frozen waterfall. Yeah okay, it wasn’t too high but again, how often do you get to go abseiling off a snowy cliff, in a snowy forest, next to a frozen waterfall. You may look at the pictures and notice lots of water. That water disappeared under a thick layer of ice, hence frozen waterfall.

The morning summed up the entire Finland tour for me. Stunning snow covered surroundings, complete tranquility and awesome activities. This is definitely the travelling for me, you can keep your culture and sightseeing. I want the great outdoors and fun adventure activity stuff. Finland has it all and lets not forget that the locals are fantastic hosts. 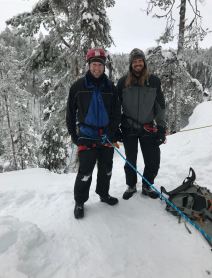 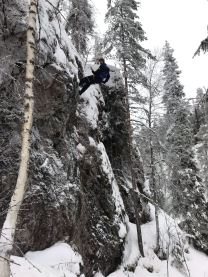 Part of the falls 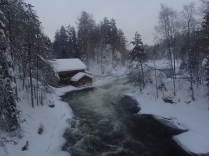 A hut and a rapid 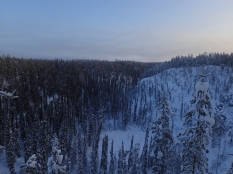 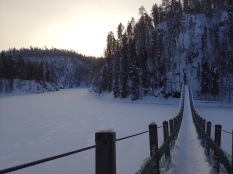 A bridge and frozen lake 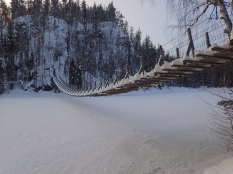 Below the bridge and frozen lake

The bottom of the frozen waterfall 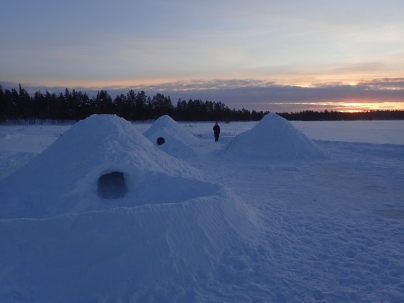 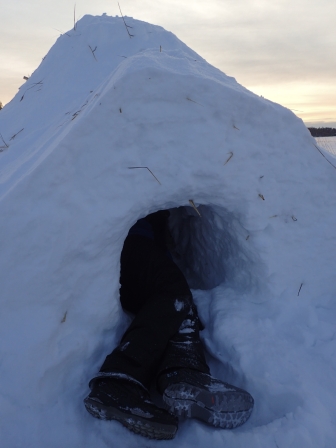 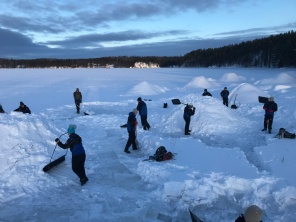 A heap of snow

One thought on “Ruka, Finland”