After three hours charging along a desert highway at 140kmh in a wee Toyota I finally arrived at my hotel. My driver, dressed in jeans, T-shirt and a back-to-front baseball cap was a young chap, Yosuf, who works in the same department as I on a dairy farm who has been kind enough to give me a lift to his home town where I would be staying for the next few days. On offering him some petrol money I think I actually caused offence and the money, a mere one hundred Riyals (twenty quid) was promptly returned to my wallet. At my hotel Ali was already waiting for me outside. Ali, also a work colleague had been kind enough to take on the challenge of being my own personal tour guide around his local area while he himself was on vacation. He had booked me into a quite lardy dar traditional hotel, one where I was kindly greeted by a young local lady at reception who happily checked me in. Welcome to Al Hofuf, Eastern Saudi Arabia.

I’ve been wanting to write about Saudi Arabia for some time now. I have lived here for over two years working on a top secret installation where experts in their field work on the mass production of……… milk. Pretty much all I had seen was the airport, cows, and the bank and ice cream parlour in my local town, Al Kharj. Always turning right onto the main road outside the farm gate, little did I know how much awaits the person who is willing to turn left. I was willing, and finally the time had arrived for me to spend a couple of days exploring a country that scares, confuses and fascinates the Western world, a country that has been closed to tourists until this year and a country that is completely misunderstood. Even I was ignorant to think that there wasn’t really much to see here and have spent vast amounts of money travelling around the world for an adventure when as it turns out, I just need to go down the road.

Al Hofuf is part of the Al Ahsa oasis on the east coast of the country, only a two hour drive from Bahrain. All I knew of it was that the majority of Saudis we employ live in Al Hofuf and that there was a big rock which rested on some little rocks. As usual pre-trip planning was non existent and other then a quick google search with Ali who was trying to plan an itinerary I left not really expecting too much other than a nice trip out somewhere different. Now I have so much to write about I don’t know where to start or, how to present a balanced argument on the subject of Saudi Arabian politics. On this matter, I will always defend this country on the grounds that she is moving forward and there is so much good about it and her people. Undoubtedly there are issues that need to be addressed but many similar issues have only recently been addressed in some of the most advanced countries in the world. Some countries still manage to sweep indiscretions under the carpet and for some reason the West sit back and ignore it. Did you know Facebook, Youtube, Google, Instagram and Snapchat are all banned in China?  The Saudis have them all, they can’t get enough of social media where Snapchat in particular appears everywhere. Obviously this subject goes deeper than social media but for an opener, hopefully it makes a point.

Every time I step out into Saudi society my preconceived illusions are shattered by the reality. I was completely thrown off guard when I was checked into the hotel by a young Saudi woman. The morning after while strolling through the old souk, a group of South East Asian women walked by with no head scarves on. Modesty still rules the day here but the rules are relaxing and at a pace not seen before in the Kingdom. Walking around the souk, the one thing that struck me was that everyone greeted each other. Sitting down in a little back ally cafe, every person that walked through the door greeted the closest person to them with ‘Salaam alaikum’ meaning ‘peace be unto you’. This common courtesy happened everywhere, people were genuinely nice to each other. The pleasantries were to continue once we had finished our Arabic coffee, a drink that happened to be the coffee version of mulled wine, when we headed on to the local museum in the hope we could find a castle to visit.

There’s four castles in the local region, all of which had been closed due to rain however, Ali still thought it worth while asking someone at the museum if it were possible to make an impromptu visit to one of them. The chap at the main desk told us to go the managers office where we were invited in, warmly welcomed and told to sit down with a cold bottle of water placed in our hands. After some Arabic chit chat and a few phone calls we were soon shaking hands once again and heading out the door as Ali happily informed me that we were off to visit one of the closed castles. As it happens the caretaker was just leaving but he had been instructed by his boss to stay put and that we would be arriving shortly. Ibrahim castle dates back to the 1500’s and was built by the Turks. Although the building within the walls are made of stone, the castle walls are made of rocks held together with mud and straw. With a lack of funding, the walls are falling into disrepair with every rain storm hence why it was closed to visitors. Money is being made available by the state to fund such restoration projects and preserve their history but this is a new concept in Saudi Arabia believe it or not, and getting funding to the right people who have the skills isn’t so easy. The caretaker was all too happy to let us in and we spent the following hour walking around an empty and beautiful ancient structure. There was no admission charge, no tourists and there were plenty of information boards written in English. This was a rare opportunity which I relished. The only irony being was that my climbing all over the place, exploring every nook and cranny was the exact reason why the place was closed.

After a quick stop for a fruit juice (Saudi’s do the best fruit juices) we headed out of town to meet a man with a big off road vehicle for it was time to go dune bashing. Ali had showed me pictures of what appeared to be a small lake in the middle of the desert and the only way to get to them was with a 4×4. Driving in Saudi is a lot like the cartoon Wacky Races only far far wackier. Speed is everything here and when stuck in traffic this should not deter you from squeezing through any gap possible. The number of lanes is always negotiable, a single lane can easily be made into two or even three when in a real rush. I have an awesome 4×4 at work but I had no intention of endangering it by taking it away from the farm and so Ali had found a chap who offered dune bashing tours around the place we wanted to visit. Jumping into the chaps 4×4 we drove for a brief period the wrong way down a dual carriageway before crossing over the central reservation and headed off into the desert where he immediately started to throw the back end out. Foot to the floor we motored on through undulating desert, dotted with small bushes and the odd camel. Golden sand then gave way to white sand and a sand dune which stood around forty feet high. Our guide lined up the dune and sped on up it, tyres struggling for grip as we circled round along the top ridge of the dune at an angle that made it hard for my arse to grab hold of the seat. Every time it felt like the truck was about to roll our guide turned the wheel slightly and normal service was resumed. This continued for ten minutes or so, hitting the dune at various angles, all of which filled me with joy and excitement. This I was not expecting.

Driving towards the lake, the sand turned golden once again (no one could tell me why there was a white patch of sand). As we approached the lake it really didn’t look that fancy but then we continued to drive until we started climbing up more big sand dunes. Finally, at the top of a rather large dune we came to a rest and were greeted with spectacular views of a huge freshwater lake, surrounded by dried out mud plains and sandy desert. With the engine off there was nothing but the sound of birds down below against a backdrop of silence. Behind me stretched the desert all the way to the Arabian Gulf. It was only 3pm and we had done so much, none of which I was expecting and yet there was much, much more to come. 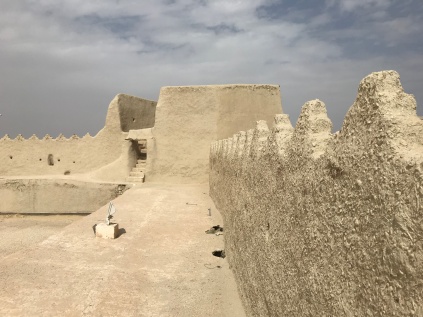 The castle wall and mosque 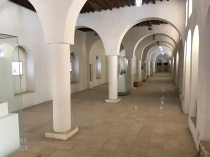