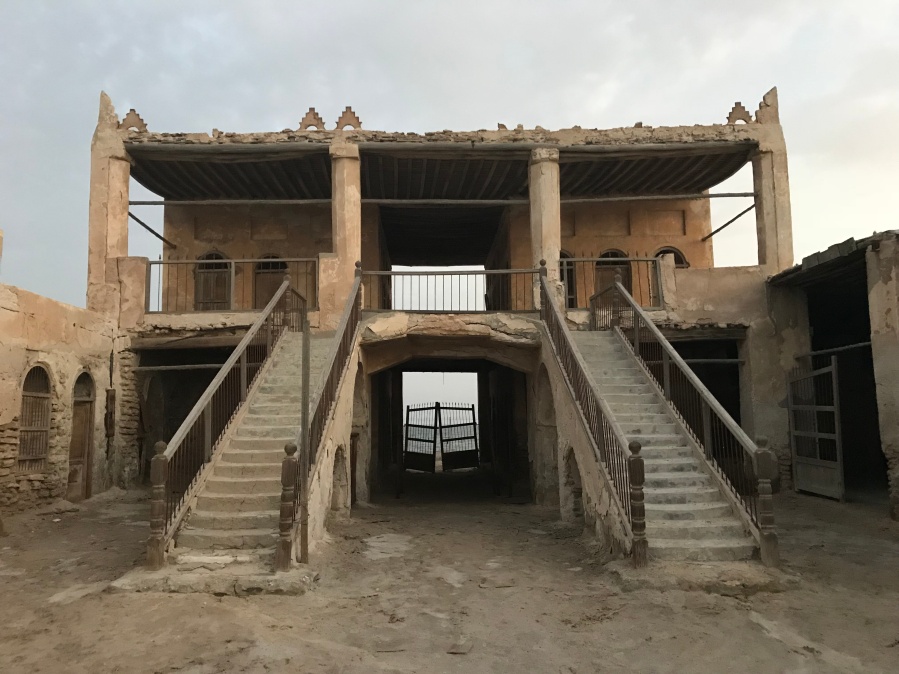 I’ve never had to write two blogs for one day before but after the souk, coffee, castle, mosque and dune bashing there was still more to see before the day was out. Next stop, the local mountain. Known to the locals as Al Qarah mountain it isn’t realy a mountain at all but more a rock protruding from the ground. Think Uluru (Ayers Rock) only smaller and much more haggard. Standing at around 75 meters high there isn’t a great amount to see until you get close and begin driving around it. It’s a good twenty minute drive and the mountain is surrounded by the local town which makes it rather well hidden. Anywhere else in the world and this site and the surrounding area would have been turned into a huge tourist attraction although thats not to say the Saudis aren’t giving it a go. Al Qarah mountain is basically a large formation of rocks which have been carved into magnificent shapes by the wind and rain. On the outside are weird boulders and columns of rock. The inside is even more spectacular, made even more so by a huge project to turn the place into something that resembles tourism. Inside the mountain is a network of caves, most of which open up all the way to the top. In the summer they offer a great place to escape from the daily 45oC highs and only up to a few years ago people could explore the mountain and caves un-hasselled and free of charge. Now people are charged for the privilege but don’t worry as you get a free coffee with the entry ticket and what they have done to the place is quite spectacular. We arrived at nightfall and as usual so far this trip, what I got was nothing as to what I expected. I thought we were off to see a few little caves in the side of a stoney hill. Little did I realise I would be treated to half the mountainside being lit up and then exploring a huge cave network which was also elegantly lit up from within. The floors of the caves were paved and even though I’m not a fan of a tourist attraction they had done a splendid job here. In most instances a cave passageway would come to a dead end but that didn’t mean you couldn’t squeeze between a rock and continue exploring away from all the lights and fancy paving. The cave network went on far beyond what had been developed and I could have easily lost myself exploring for hours on end.

After seeing away my free coffee we headed off back into town to see a water fountain. This probably doesn’t sound so fascinating but hang on in there for first we had to blag our way into the local park. From my limited knowledge, Saudi social life is traditionally split between that of family and that of single men. Tonight was family night at the park and so by right Ali and I would not be allowed to enter. The gate was manned by a sleepy security guy who, when asked politely if we may go in, reminded us that it was family night but nonetheless we could walk on in. This is Saudi Arabia now, well, certainly in the East at least. All those stories of the nasty religious police are now just that, condemned to history as the new generation of Saudis move towards a more tolerant society. Incidentally we wondered through the park and along the lake until out of nowhere pop singer Adel’s voice could be heard singing away over a loudspeaker. At the same time an array of fountains burst into life firing water into all directions and in a variety of varying colours while hoards of children ran to the barriers of the lake to watch. This continued for around fifteen minutes and once Adel had finished, a playlist of various Arabic songs continued the show. Not quite Vegas admittedly but still a pleasant way to finish off a busy day of touring.

There was one last item of business to take care of, that of eating. The night before I had been subject to a nice Italian meal. Tonight I’m not sure what I was subjected to! On first appearances the restaurant was a real smart, trendy place, the front of the building was all glass and there were individual booths situated on the second floor. On the bottom floor there was the open kitchen. As we sat down we were presented with an iPad which we were to use to browse the menu and place our order. I kept things simple with a burger, chips and fruit juice. Ali went for fried chicken pieces covered in cheese and chocolate, creamy chicken encased in bread and some cement for a drink. Yes you read right, chicken, cheese and chocolate. It was a taste sensation I’m in no rush to experience again. The cement was essentially a thick milkshake made from a box of minced up Oreos. I’m often asked what the food is like in Saudi, here’s the answer; varied. The following day we did get some traditional Saudi dining on the go. Huge plates of rice with chicken, bits of veg and a side of salad, all eaten with our fingers while sat on a comfy carpet. Eating rice with your fingers is challenge enough, trying to sit on the floor and getting my legs arranged into something comfortable is a whole new level of challenge for me and my giraffe style legs.

The aforementioned traditional feed was much needed as my second day in Al Hofuf was as busy as the first. The area is renowned for two commodities. The first is oil, with around 80% of the countries’ oil coming from the surrounding area. The second and arguably of most importance is the humble date. The place is covered in date trees, not that I’m a huge fan although I did enjoy a nibble with a coffee and I was treated to some bread which contained dates and turned out to be absolutely delicious. Somehow I ended up in a deep conversation with a local chap who had helped to get Al Hofuf and the Al Ahsa region listed as a UNESCO heritage site. He was extremely interesting, conversing in good English and telling a compelling, fascinating and intelligent story about the region and why he passionately believed it should be given UNESCO recognition. In short, the area was recognised for its sustainable use of water through a network of irrigation channels used for the date trees. Used for over 400 hundred years the system has prevented salt build up in the soil which is so often found in other areas of the world. The area was also recognised for its cultural diversity and heritage. In 2016 there was a terrorist attack by ISIS killing four and wounding eighteen. This was seen as an attempt to create a divide between the Sunni and Shia population of Al Ahsa but instead it created the complete opposite and united the whole area. The residents are proud of where they come from and it shows from the people I have met.

Heading to my next destination, Bahrain, there was just enough daylight to visit one last wonder. Al Uqair Fort is quite possibly one of the best places I have ever visited. Sat on the coast, it’s history is rather sketchy and so all I can tell you is that it’s old and it was one of the biggest ports in the region back in its heyday. When we turned up the sun was setting and we were met by two Indian chaps who followed us around as we waltzed into the Fort for a good look around. I think the Indians were the guardians of the Fort and it is my guess they saw very few visitors. As with the castle in Al Hofuf we had the whole place to ourself. It was a shame we didn’t have a bit more daylight but the stone pillars looked stunning in the setting sun light. The port area was fenced and locked but fortunately our chaperones had the key and were happy to let us walk in and explore the crumbling Winterfell’esque structure. With so much to see, the sun was long gone before we finally got back in the car and got on our way.

Al Uqair was the icing on a very big cake full of treats. Just two days in one small part of Saudi Arabia has been a mind blowing and epic experience. As with all the great places in the world that I love, it is because of it’s uniqueness, the fact it is a country that is so misunderstood and, there are no tourists, literally none. Yet Al Ahsa on its own has so much potential for tourism it’s unreal and by getting people to visit and charging them for the privilege will bring in much needed money to maintain some of the most beautiful historical sights I’ve been to. Being on the doorstep of the UAE, Bahrain and Qatar, tourism can be easily introduced. But that’s the irony as I have discussed so many times before. Such sites are beautiful and amazing because I had them all to myself and they retained their rustic charm, in essence they had not been commercialised. This is also my take on Saudi Arabia as a whole, as it moves into the 21st century it will fall in line with the rest of us and then loose what defines it as a country. Social and political reform must, is and will continue to come but it will come at a cost, one way or another. 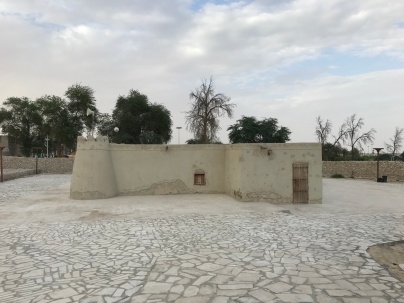 One of the oldest Mosques in Islam 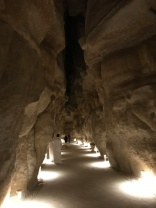 Lights in a cave 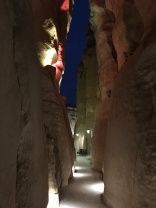 A column of rock

A big rock on top of little rocks 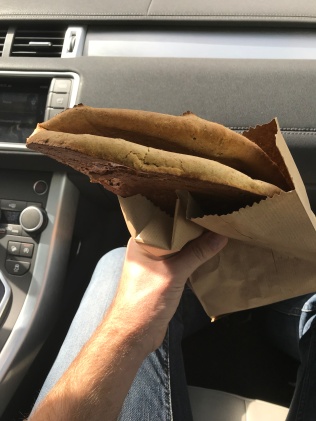 A slap up meal 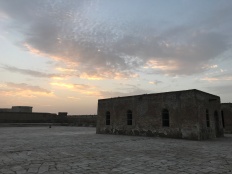 Part of the port