I got a wee emotional in my previous blog but I was a little upset I couldn’t see some of the places I’ve been wanting to see for years but as per usual I had failed to take into account my previous experiences when travelling anywhere. That is, the best places to visit are seldom the most popular and almost always the journey and the people you are with are what makes an epic trip. After the failure of Al Ula we immediately headed across to Al Disah valley in the Tabuk region where the drive itself was simply spectacular with the scenery changing every hour or so. Climbing a steep mountain pass we were greeted at the top with splendid views of our road winding back down into the desert. At the bottom we were greeted with chicken and rice at a local cafe. Things were looking up although time was against us with the sun falling out of the sky and Al Disah yet to see.

I knew nothing of Al Disah up until the previous day but I sure am glad we changed course and popped by for a visit. Part of a natural reserve, wadis and valleys ooze natural springs that allow lots of green stuff to grow between the incredible sandstone cliffs that litter the region. Frankly, its spectacular and unsurprisingly it is being lined up as a tourist hotspot. Thankfully though no one has yet found the place to begin developing it and so at present the area is available to explore freely and traditionally, in a 4×4. Also keeping within tradition there are no sign posts to any key points of interest but by sheer luck, after passing through the village, we turned down a road which finally ran out, turned into a little stream lined with palm trees, huge rushes and, overshadowed by the huge sandstone cliffs on either side. We passed a few people having a picnic and continued deeper and deeper into the valley for at least forty minutes with the sun setting as we went. It was incredible. I could have happily parked the car up and spent several days hiking and camping under the stars there. Hopefully that’s the kind of think they will do with the tourist folk as a mass of 4x4s churning up the wadi will be disastrous. We could have continued for what felt like forever but as usual time was against us and after a little walkabout we turned around and headed back out of the wadi. We happened upon a local also driving out with only three tyres intact and so we stopped to ask is we could help. Turns out someone had already left to get his tyre repaired but upon hearing that we had come from the other side of the country he insisted we spend the night at his house. We politely declined and drove on.

Off the cuff I had decided we would stay at a little fishing town on the Red sea coast as it wasn’t too far from Al Disah and I thought we could take the highway down the coast the following day and explore some of the incredible beaches that are supposed to be hidden away. As we sped towards Duba a man by the side of the road waved us down. We dutifully sped by until we finally made the snap decision to turn around and see if we could help. The chaps car had come to a stop and its battery was in need of juice. As well as grateful he appeared rather flustered as he tied the ends of his jump leads to our battery and as we waited to get some life into the very dead battery he got on to his phone. Car started, he climbed in through the drivers window of his truck that was barely holding together with a flat battery the least of its worries and he sped off into the night. Ali informed me that the chap was trying to get his Aunt to the clinic because she was sick. Nevertheless, he had been on the phone to his son telling him to prepare us dinner! Ali had politely declined but within a couple of hours I had witnessed two acts of hospitality famously associated with Arabic people. Upon finally arriving in Duba, we found somewhere to stay, somewhere to eat and I promptly went to bed for I was exhausted and another long day lay in wait.

Another reason for me choosing Duba as place to say was that it was described by locals as ‘the pearl of the Red Sea’. From what I saw I’m not so sure yet in complete fairness we spent little time exploring when dawn arrived and drove on down the coast in search of the beaches of Umluj. This was the least exciting drive as it was simply three hours of flat nothingness but I was excited to see the beaches around Umluj as they looked stunning on Google! Typically, on arriving in the town there were no signs to any beaches. Google maps had no idea what we were talking about even if Google images did. Again Umluj is in the firing line for tourists, being part of the countries Red Sea Project which plans to build huge resorts to attract tourists to it’s stunning coastline. We failed to find it! We searched just south of the town, found a stunning blue sea but nothing in the way of fluffy white sand that I was hoping for. Don’t get me wrong, besides getting the truck stuck in some wet sand next to a sporadic mangrove, the sea looked extremely inviting but I left a little disheartened that once again I didn’t get to see what I was hoping to see. Ali on the other hand had another surprise up his sleeve and we left Umluj for Kyabar, another 400km and a race against the sun setting.

Khaybar is an oasis town a few hours north of Medina. Inhabited by Jewish tribes for centuries, the Muslims lay siege to the town in the year 628 before eventually taking control of the town. A fort atop of a hill surrounded by palm trees still survives with the old town crumbling at its base. Everything was built from mud and palm trees and the whole area is in a sorry state but it is absolutely fascinating. The tourist police are yet to make it here as are the tourists and so in the traditional Saudi way we were left to freely roam and explore the ruins, going anywhere we wanted. Again, I could have easily spent a whole day exploring the ruins. The old fort itself offered amazing views of the local area and down onto the old town below. Exploring the old town was incredible and just in case you needed more, there was another old town that was more intact a few hundred meters up the road with lots more old streets and buildings to explore. After seeing all of this, even for only a couple of hours, completely erased the disappointment of not seeing the sights in Diriyah and Al Ula.

After another long day of driving we entered Medina, the second holiest city in Islam. There was a little uncertainty about where I was allowed to go although the research indicated I could not go within the inner ring road of the city. Everywhere else was fine. The centre of Medina is where Prophet Muhammed is buried hence the importance of Medina and the reason why non-muslims are forbidden to enter this part of the city. Aside from this important point of interest, the rest of the city is manic with dangerous/crazy/nutcase driving taken to a whole new level even compared to that of my local towns of Riyadh and Al Kharj where I still haven’t dared venture to drive. On this trip I let Ali do all the town and city driving and I stuck with the long open roads. As with are previous two nights, Medina provided us somewhere comfy to stay for the night before getting up the following day and speeding off to out next stop. As Ali headed off to the central Mosque, I hit the hay.

The previous day had we had experienced the road take us right through the middle of several huge fields of lava. It had been an awesome sight of which I cannot recall ever seeing before and one I was naively unexacting to see on this trip. The irony being our last point of interest before heading home was a huge volcanic crater. I just didn’t realise that Saudi Arabia was home to so much volcanic activity, albeit largely in the past. Driving out of Medina we yet again drove through another huge landscape of old lava fields. They looked new, as in huge, black and completely sterile and I guess they are new in geographical terms with the eruptions taking about 800 years ago apparently. Volcanoes litter the landscape along with strange escarpments that just appear from nowhere. When there isn’t old lava up to the height go a two story house lying around then there is huge expanses of desert littered with small rocks, just like the aftermath of a hailstorm, only with rocks the size of basketballs. These scenes carried on for hours and it would appear huge areas had not been touched since the days the whole area was burning and raining rocks.

Al Wahbah crater itself is a truly special place. As with a lot of places here, sat in the middle of nowhere we drove up to the immaculate and empty visitors centre. No cafe or gift shop open, no people, perfection. Walking up from the carpark to the first look-out you are greeted with one of the finest views this planet has to offer. Yes there are a lot of mighty fine views around the planet but this is surely one of them. The crater is 2km wide and 250m deep with a bright white lake of salt at it’s centre. Apparently it’s not salt but sodium phosphate so same same but different! Wondering around a section of the rim away from the look-out points and the view gets even more impressive and I spent a good thirty minutes just staring into the crater. Yes you’ve guessed it, I could have spent the whole day there. Hiking around the crater, hiking down inside the crater and then camping for the night would have made an incredible experience. In the middle of the desert, away from the bright lights, the stars would have looked insane and the sodium lake would have looked incredible in the moon light. Yeah ok great stars and moonlight don’t go hand in hand but you know what I mean!

With 3,900km knocked out by road in 4 days I feel like we had a good crack at seeing a chunk of Saudi Arabia but at the same time I feel like I’ve barely seen any of it. The first person I personally know to have visited Saudi Arabia as a tourist told me he left no pebble unturned during his six day visit and that the country is ‘pedestrian’. To end this politely, I strongly disagree. I hope to see much much more of this country. 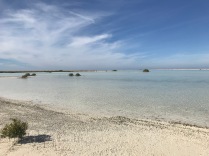 A little bit of mangrove 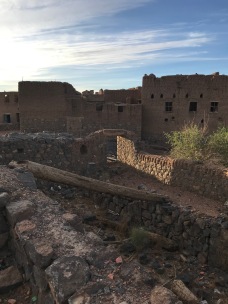 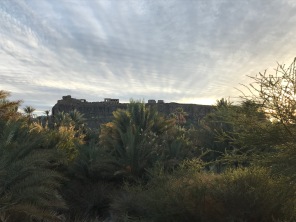 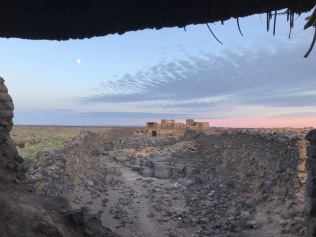 Top of the fort

Down in the old town 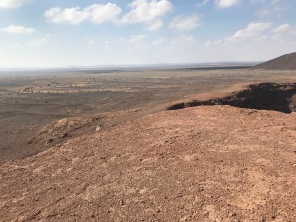 Nothingness around the crater

One thought on “Pedestrian my arse”