In all honesty the illusion was shattered before we had even arrived after being told that there aren’t any beaches on Caye Caulker! Not quite what I had in mind! On arrival, stepping off the speed boat we were greeted by shimmering blue tropical sea, sandy streets, a cooling breeze to ease the heat from the sun in the clear blue sky, palm trees and no cars. The island is technically now two islands after being split in two thanks to a hurricane. The main island where we had landed is the developed part where the majority of stuff is and can be walked across in twenty to thirty minutes. The second island has very little which as we will find out makes it the place to be. So you may be thinking that it sounds perfect and surely there is nothing to complain about. Well in a sense it is perfect relative to somewhere like Skegness, and getting to be in such beautiful places should never be taken for granted by someone lucky enough to visit, but as a cycled around the island I soon came to realise that it was the exact opposite of what I wanted and what I had longed for. How did I end up on a bicycle? Our travel company had a partnership with the local school on the island and some of the children took us on a bicycle tour of the island as a kind of welcome/orientation/sight seeing adventure. It was good fun, the children were polite and good humoured, we saw the highlights of the island and finished in a classroom learning the local Creole language which is a mix of English and anything else that has influenced the language in the past few centuries.

Upon returning the bikes sunset was almost upon us, a spectacle that Rut was particularly excited by yet for me this moment confirmed my thoughts of the island before I had even slept a night there. One of the prime viewing points to watch the sun set is on the sea front next to one of the main bars and beach areas. There is no beach, just a bar and a lot of concrete where you can sit and dangle your feet in the warm water. At sunset this area fills with people sitting on the low sea wall taking selfies, sinking a beer and watching the sun dip below the horizon but it all feels so fake. It sounds crazy but stick with me. I’m very lucky in that I have seen spectacular sunsets all around the world and even more so that I live in the middle of the Arabian desert and see the most incredible sunsets almost on a daily basis. A sun setting over the ocean can never compete with that of the desert or the African savannah. But….. what makes a sunset so special is when you least expect it, it’s when I drive back from the office at the end of the day and notice a blood red sky which suddenly makes the isolation feel totally worth it. It’s when you find yourself alone, lost in your thoughts staring across an orange landscape. It’s when you and your partner feel like the only two left on the planet staring out across a glowing landscape. These are the perfect sunsets, not the perfect Instagram picture, not sat on a sea wall because that is where everyone else goes. I was geared up for a peaceful island paradise but I had landed in one of the many hipster, Insta, modern traveller, generic hell holes that now litter the world. Free wifi everywhere, more cocktail bars than people, swings for seats in front of the bars, hammocks in the sea, signs saying ‘Go Slow’ to make it clear how the pace of the island should be. Every fricking tourist island on the planet has the same motto! We visited one of the main venues on the island where one can spend their day by the sea, hammocks full of young, hip, well trimmed people glued to their phones. Good for them but I would have to find somewhere a little less 2020. I want to finish on a high because it was the tourists that I’m angry with more than the island. That night I had a coconut curry with lobster, snapper and shrimp and it was to die for. Honestly it made me happier than Donald Trump at a golf course.

I woke up at 8am the next morning with the all too familiar feeling of ‘oh crap’. Ironically after just ranting on about the many cocktail bars, the group had decided to sample a few of them. It was 2am when we returned to the hotel and we had a snorkel trip at 9am. Previous experience told me I needed to get away from the drinking as soon as possible and indeed we left before midnight until Rut made the fatal mistake of returning to the bar to check on a friend. That gave away our intentions to leave and we were both swept back into the rounds of drinks. Disappointed with my lack of inner strength and with my guts not feeling prepared for a day on a boat I was prepared for the worse. Within half an hour of being on the sailing boat I was numb and part of a serious internal debate about what was going to explode first. Something I would usually always avoid I took the decision to head below deck to the tiniest bathroom in the world, sit down with my knees touching the ceiling and let rip as the boat gently rocked in the rolling sea. The open window (a whole in the wall) was right above me and under several of the guys who had been enjoying the open sea and blazing sun. Everyone who has ever traveled has such a story to tell but nonetheless I exited the depths of the boat feeling completley embarrassed but knowing it had been essential! One end feeling better I now had to contend with feeling sick. Rut wasn’t much use to me as she too was suffering from sea sickness. I know it was sea sickness for her because she is immune to hangovers such as people in their mid-twenties usually are. I on the other hand suffer from hangovers more frequently these days and sea sickness bizarrely hits me like a grenade on some occasions but not at all on others. An anti-nausea tablet from the crew, combined with Immodium put an end to my greatest fears and left me with just a headache which continued until reaching dry land six hours later. Rut took the no-nonsense approach and fed the fish!

Incidentally the fish were fantastic. The whole point of being on a boat was to go snorkelling on Belize’s coral reef, the second largest in the world and it didn’t disappoint. Our first dive sight treated us to corals that were still in great condition, with plenty of fish and relatively few people. A boat patrol stopped people from doing anything stupid and it is clear that Belize intend to do their best to protect the reef. We sailed on further down the reef to our second dive site and I felt no need to jump in again due to my physical state but we were told it was a good place to see sharks. Never one to turn down a new experience I geared up and hopped back into the shallow waters and was instantly greeted by several Nurse sharks. Several meters long and in every way a shark except for the teeth, these beautiful creatures are pretty much harmless, casually swimming around and even lying amongst the sea grass doing absolutely nothing where you can swim right over them. To top it off a huge sting ray appeared, sifting through the ocean floor without a care in the world. I don’t believe I have swam with a sting ray before and it was a beautiful sight to watch her glide through the water. The crew had one last stop for us and I decided I would definitely stay on board for this, banking all the great things I had seen already and maintaining some energy for the trip back to shore. Fantastically though Belize had one more treat of the day to slap me around the face with, a turtle. Out of nowhere I heard a little puff of air and looked over to see the little bugger surfacing which was repeated on several occasions. It is safe to say that I have never been on a snorkelling trip and seen quite so much. The trip home was on calmer waters and I was conflicted as the crew took their foot off the gas/air/sail(!?) and headed back at a snails pace. Out came rum punch and nachos covered in fresh onions, tomatoes and shrimp, the mid afternoon sun felt amazing, the group was in fine fettle, ordinarily I would be leading the way to drink the boat dry and eat any food put in front of me while soaking up the sun and lazy pace. However, my stomach was sore, my ass was untrustworthy, my head was fuzzy, my skin was burnt and I just wanted to get back to land! I felt old and defeated! Investigations are still ongoing as to what made such an incredible day such a challenge for me personally. Dodgy food the night before, too much gin the night before, rough seas at the beginning of the boat trip or, simply being past my prime!? I suspect it’s a mixture of all those things. Belize’s coral reef though is a must see, and the cocktail bars? Find somewhere to have a quiet glass of red wine and get an early night before heading to the reef would be my advice! 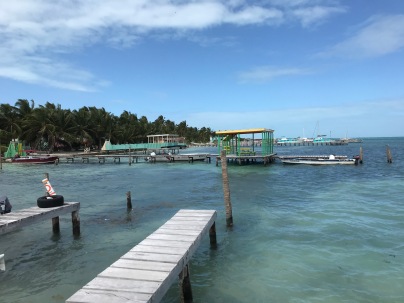 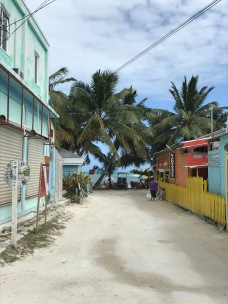 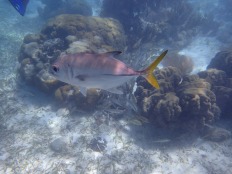 A boat with a tiny loo