After lunch it was back to business. Our main purpose for being in Arusha was to head out on a two-day safari to the UNESCO World Heritage sites of the Ngorongoro conservation area and Serengeti National Park. We packed the essentials and piled into three jeeps which transported us to another campsite approximately 100 miles away next to the Ngorongoro conservation area. It was all very exciting as we were in actual safari jeeps and heading to the Serengeti. Little did we realise that the Ngorongoro crater was a gem that few of us had heard about before and would make the Serengeti look like a safari park in the middle of England. We arrived at the campsite at nightfall to discover that our tents had already been put up for us and dinner would be ready within the hour. All we had to do was roll out our sleeping bag, eat, have a few beers down the bar over a game of cards and head off for an early night.

My travel diary never fails to make me laugh. It well and truly sums up who I am and where my priorities lie.

‘Monday 12thMay – Up at 5am but at least got a decent breakfast. Left for the crater to see elephant, lion, wildebeest, rhino, flamingo, hyena and other stuff like hippo and buffalo. Stopped for a packed lunch, minding ourselves of thieving monkeys’.

That is all I had to report about a World Heritage Site and one of the most visually stunning and animal dense places I’ve ever been to. I mean, breakfast and lunch both got mentioned but I reported hippos as ‘other stuff’! I know this was an amazing day because I still have very clear memories of it not to mention an A3 sized photo of the jeeps driving in the crater framed on my wall at home. The Ngorongoro conservation area is named after its centrepiece, that being the Ngorongoro crater. A huge hole left behind after a mega volcanic blast a few million years ago. The crater is six hundred metres deep and has an area of 100 square miles. We literally drove up the side of the crater, over the rim and down inside. It was a chilly early morning with the sun still rising and the view that welcomed us as we descended into the crater was fantastic. Lush green bush, lush green grassland and a huge lake in the middle. We were completely spoilt with animals loitering around everywhere and almost all of us remained standing through the roofs of the jeeps. I had the unfortunate mishap of losing my banana leaf hat (a hat made from banana leaves purchased in Uganda) to a gust of wind but luckily my cry for help was received by one of our safari guides and they turned the jeep around to collect it for me. On another occasion the jeeps all came to a halt in a weird kind of Jurassic Park moment. We had just driven past a group of lions that were lounging around by the side of the road when our larger-than-life American, Alethia, could wait no longer for a pee. As we looked around we finally lay our eyes upon Alethia jumping out of the jeep, squatting and having a pee next to her jeep on the road, a few hundred metres from the group of lions. Alethia was the kind of lass that was hard to control and all the safari guides could do was hope today was a good a day.

I can’t believe I nearly forgot. Warthogs! The funniest animals on safari! We saw several in Ngorongoro crater which wasn’t anything new as we had seen them before but they are absolute pigs (excuse the pun) to get a photo of. As soon as they hear anything mildly scary they take flight and all you are left with is a tail going straight up into the air, bouncing up and down among the tall grass as the posh piggy gallops away. On this occasion though, they didn’t seem too fussed about us being there. Maybe it was because we were in small jeeps as opposed to a huge yellow truck. Either way I managed to get some good pictures of them as they merrily went about their business.

This day was to be a bloody long one because after lunch we headed off down the road to the Serengeti and got straight onto the game viewing as soon as we entered the park. The name Serengeti is implanted into your brain at a young age, along with the Maasai Mara and possibly Kruger National Park. If you want to see an animal kill another animal amongst many other animals, then these are the first places one should visit apparently. We loved Ngorongoro crater but the Serengeti is an expected highlight like the pyramids or the Taj Mahal. Unfortunately it wasn’t a highlight for me, nor the rest of the group I would say. The problem with safaris (and travelling in general) is that you have to be in the right place at the right time. We are raised on nature programmes expecting savannahs full of animals that ordinarily you would only see in the zoo and, to add a bit of excitement they would all be fighting or killing each other. Then you come to learn that actually it takes months to get that kind of footage and these guys (the photographers) are the best at what they do. Therefore, my chances of witnessing a lion kill or watching a leopard hit 70mph as she attempts to take down a gazelle are next to nothing. Sometimes just seeing some animals is an issue and an issue it was in the Serengeti.

During our first afternoon there we saw lions and hippo and that was about our lot. Granted, these are two of the coolest animals in Africa but we had seen them in abundance that morning and actually, lions do nothing in the day because it’s too much effort when it’s light and warm. And hippos? Well they just lounge around in a pond, flick their ears and yawn from time to time. It’s amazing how such an incredible environment becomes the accepted norm but one of the best things about this tour was that it almost always threw in a new epic moment to keep you on your toes. Alas, there was not a moment on this occasion but the Serengeti is an absolutely stunning place. It is everything you imagine and more (animals aside). Dusty tracks, grassland savannah, acacia trees and a clear blue sky that was so huge it defies physics I’m sure. It was wild, it was peaceful and, we were going to bush camp in the middle of it all which, in all honesty was a wee moment.

Camping was always immense fun in East Africa as it was in great environments and the weather was always kind to us. Our campsite in the Serengeti was almost a bush camp. Any campsite without a flushable toilet is a bush camp in my eyes. A bush camp basically means if you want a number two then you will have to dig a hole, near a bush, where no one can see you. After digging a hole and doing your business you then realise there is no running water to wash your hands. This is the definition of bush camping. The Serengeti campsite we were at had a long drop toilet which is a deep hole in the ground with a toilet seat on top of a wooden box with a shed over the top of that. It will have been used by many, many, many other people. It will emit a strong-smelling gas that is responsible for the demise of the Arctic Circle and to cap it all off it will most likely have spiders everywhere. This, in my mind, is far worse than digging my own personal toilet in a time of need. Away from the toilet facilities there were designated dining areas which were areas we could cook and sit at picnic tables to eat. These areas were enclosed by a cage. I kid you not. Remember, even though we didn’t get blessed with an abundance of animals, the park is renowned for having just that and we were camping in the middle of it all. Anything that was in the park, including the lions and the hippos we had seen could come wandering on down for a snack which meant we could be the snack or far worse, they would take off with our food. The rest of the campsite was open to all and so usual ‘bush camping around wild animals’ rules applied. No food or toiletries in the tent, be super careful when trekking over to the spider-infested bog in the middle of the night and pray to God that the animals really do think your tent is a solid rock. All of this however, made it extremely exciting.

The following day kicked off with a 6am wake up and we were on the road by 7am on the lookout for anything we could find. We fell over some more hippos and lions and also plenty of giraffes which pleased me greatly. We did come across a lion with her cubs eating a carcass. Excuse me for the lack of build-up and excitement here but our jeep did not get to see much of the event. I believe one of the other jeeps did but we were pushed out of the good viewing area thanks to a truck full of idiots that took it on themselves to barge in front of several other safari jeeps, drive off the track and pretty much park on top of the lion cubs. This is the dark side of large African national parks. Bloody tourists! As soon as something good is spotted, a call will go out on the radio to alert everyone within what feels like a two-thousand mile radius. There is then a heap of safari jeeps and excited tourists all jostling to get a look at whatever interesting is happening. That is not how I like to view the natural wonders of the world. The lion cub incident was just something we would have to deal with and as such we decided to drive on. After all, why try and fight to see what everyone else is seeing when there’s thousands of empty acres to disappear into and enjoy? The highlight of the Serengeti was getting a bit of time to watch vultures devouring the leftover carcass of a zebra. I have a more than adequate picture of a vulture gliding down to the carcass already surrounded by other vultures. In the background you can see a hyena’s head as she sits in the grass patiently waiting for her turn. I can only guess hyenas will not pick a fight with vultures. To me, vultures didn’t come across that ugly. They certainly aren’t pretty but, when watching them do what they do, in other words clean up the trash, they are brutally and fantastically efficient. They don’t mess around and are really quite amusing to watch as they flap around fighting with other diners, while picking off every last strand of meat from a carcass. We left the Serengeti having seen no elephants, rhinos or the elusive leopard. For the original seven, we had been in Africa for almost a month and was yet to see a leopard. Trying to spot one was starting to become an unhealthy obsession!

Taken from my unpublished ‘The African Trigtale’. My experience on a ten week overland tour I did in East and Southern Africa in 2008. Kindly edited by Lauren Goringe. 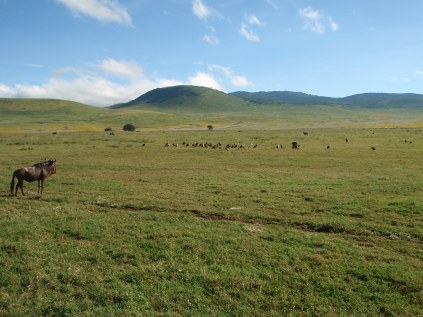 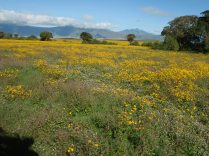 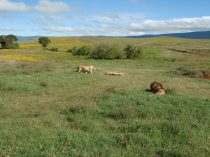 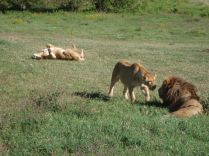 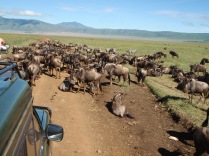 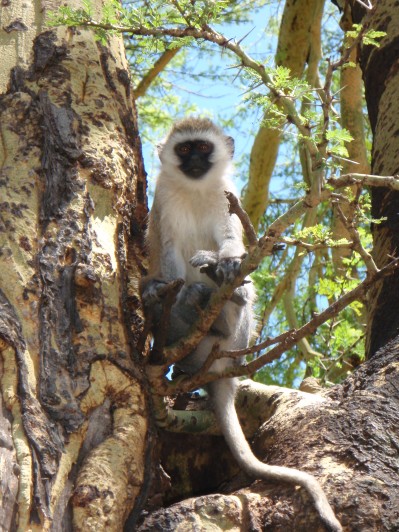 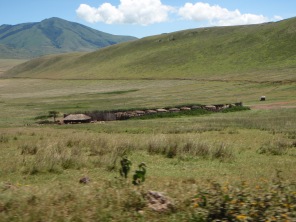 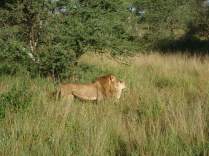 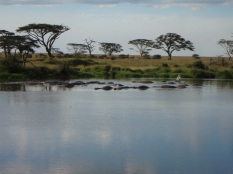 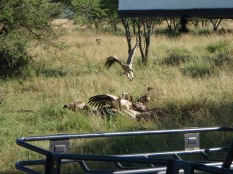 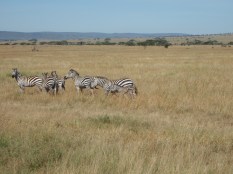