Well, we arrived in Cambodia on Wednesday and it is massively different to Vietnam for saying it’s a neighbor. The trip from Saigon to the capital Phnom Penh took approx seven hours on a public bus which wasn’t too bad, they even had Mr Bean on dvd on the 32inch flat screen on the bus. I suppose it’s because we are still in the delta region but, everywhere is flat, quite dry, large open spaces, all of which makes sense once you get to know the countries tragic past. The weather is different, with hot weather but heavy down pours in the afternoon, we hadn’t seen rain since Halong bay so it’s kind of refreshing. And the food is awesome! I don’t know why, I thinks its got a bit more flavor and they serve a lot of eggs with their food, winner!

I knew nothing of Cambodia or its genocide until now. This is now my fourth visit to such a place, with Rwanda, Auschwitz, and Vietnam being the ones before hand. Again Rwanda still tops the list for moving me to the point of tears but Pol Pot (Cambodia’s exterminator) gave it a good go. The Pol Pot regime was voted in by Cambodians legitimately however, the day he won the election celebration turned to chaos before lunch had even been considered. He forced everyone out of the cities and basically for four years his regieme hunted down professionals, academics, foreigners and traitors, tortured them and killed them. He thought Cambodia was becoming Americanised and anyone who was intelligent supported that and so he killed them. Everyone else was forced to work in the fields because hard work would teach them the values he believed in. Approximately 1.7 million died over four years of rule either through murder of malnutrition and exhaustion. The boarders to Cambodia were closed throughout this time and it wasn’t until a handful of escapees made it to Vietnam that word finally got out. Pot “ruled” the mid 1970’s and I find it hard to believe that it was Vietnam who went and saved Cambodia so shortly after their own devastating war. I can only assume they had a bit of weaponry lying around that the Americans had left them. Besides it only took ten days with little fighting for the Vietnamese to displace Pot and his henchmen.

So hopefully that’s the end of genocide and major war for a wee while! 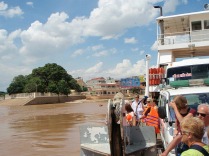 A bit of Phenom Penh

The memorial up close