So tour number 1 is complete, here in Bangkok. Our last few days in Cambodia were largely spent traveling. A major night out, on a pub filled street was had for our last night in Siem Reap which was jolly good fun. The following day saw me having cows intestines which is just what I needed! It was minced up and cooked kebab style and basically looked like cow sh*t, so still bits of grass and whatever the cow ate before it got deaded. I would say it was nice, but it wasn’t! That was later washed down with 2 shots of rice wine. One came from a bottle with a snake and a baby crocodile in it, the other from a bottle loaded with tarantulas. They tasted slightly better than the cow guts! Remarkably I woke up with no problems to report with regards to my digestive health.

We spent a night in Battabang which was to be our last night in Cambodia. We had a trip out around the local villages to see what they do when not working in the rice fields. Rice paper making, rice noodles and fish were the main hobbies, all of which required working from dawn till dusk. The fish butchery stank, soo close to being sick! Fish just piled up on the floor in a hut or by the side of the road yet weirdly with no flies around. Essentially, it was a fish processing plant. Cambodians rely on fish as a source of meat as it is much cheaper than other meats. They have an awesome dish called fish amok, and another with beef called luc loc. The food has been awesome.

The bamboo train was interesting. How we didn’t come off the tracks I have know idea. I think it’s generally used for shifting rice but if not then it’s used as a tourist attraction. It’s basically a bamboo floor resting on four train wheels with a lawn mower engine providing the power. It was good fun, especially when it came to arguments between the operators as to who was going to give way and get off the track to let the other go.

From Cambodia we headed straight to Bangkok. Crossing the border saw immediate changes such as road rules, roads and basically a much more developed country. Bangkok itself is well, just a big big city. And cities are all very much the same! We did have a very interesting night out! Obviously we had to go to a ping pong show which was interesting to say the least and is something that doesn’t really need to be seen again. The tuk tuk ride to the show was one of the best things as we hurtled through the city at speed.

So overall, the trip has been awesome, two extremely different countries (can’t really comment on Thailand as I’m not here long) that I both highly recommend. So back to the UK on Thursday for 10 days of cheese and tomato sandwiches, salt and vinegar crisps, PG tips and pasta! Nepal and India are up next which I’m sure will be a whole new and very different story!

A bamboo train pile up 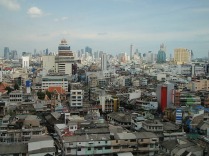