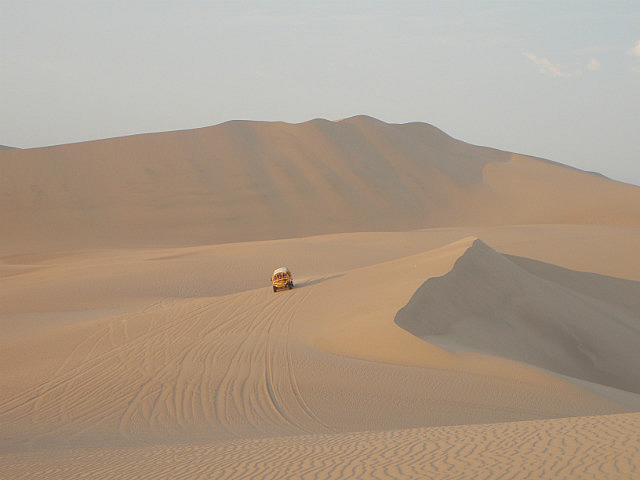 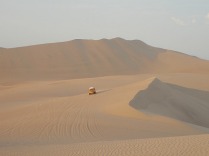 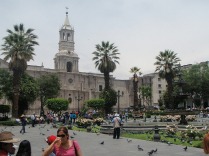 What a few days I’ve had! Not quite sure where to start and what to include or leave out! I got on our truck Frida for the first time on Thursday I think and headed out of Lima towards somewhere with lots of sand and big big V8 sand dune buggies. We went out into the dunes and drove around nice and fast for a while with a few stops here and there to do some sand boarding. The sand boarding didn´t go quite so well for me thanks to the board edging in and not being able to get my bloody legs up off the ground as the boards were only small. Good fun though, and after watching the sunset we headed to our desert camp which was just a camp fire in the desert somewhere. The night was of mixed affairs. The BBQ was awesome, the surroundings was awesome, the free pisco cola was nice to start with but went down a bit too easy and wasn´t so awesome later in the evening. Ultimately though it was superb getting to sleep out under the stars which is something you can´t really do so easily in Africa because of mosquitoes.

We were up at six the next morning and thankfully survived the morning buggy action on the way back to our hostel where we had breakfast and washed the sand out of every place you can think of. Friday was pretty much a write off thanks to an extremely bad head and made a million times worse by getting 3000ft in the air in a tiny four seater sesna. I was looking forward to seeing the nasca lines and having some awesome photos but even without a sore head that would not have been possible for they are not so easy to see. The half hour flight was good but made even a sober person feel ill and the nasca lines are actually quite small and certainly not as white as you see in pictures. See if you can spot them. The alien man is quite easy to spot but that is thought to be a hoax I think. Note also that a road passes straight through where some of the nasca lines are as they were discovered after the road was built. As for their history, it´s all bit of a mystery but most likely built for the Gods at some time or another. That evening was spent camping on the beach which is always fun.

We are now in Arequipa which is quite a lovely place. We celebrated one of the guys birthday last night (Saturday) which was a fantastic night out. Today a few of us went to see Juanita who is a 540 year old dead 13 year old girl! She is quite famous for she was pretty much perfectly preserved in ice after she was sacrificed by the Incas. So intact that they know she ate eight hours before her death and that her meal was vegetables. Then she got clubbed round the head with a single fatal blow. Tonight sounds like I maybe eating llama steak which I´m looking forward to. And on a final note my Spanish is just about getting me by and seems to improve with alcohol consumption. Maybe that’s in my head, but I like to think it just gives me more confidence and that now I can talk utter dribble in two languages when tipsy!